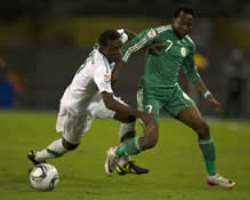 Flying Eagles player in action
Ex-international, Felix Owolabi, has emphasized that only teamwork could see the Flying Eagles to victory against France in tomorrow's quarterfinal clash at the ongoing FIFA Under-20 World Cup in Colombia.

The former Green Eagles' prolific left-winger, whose trademark bullet shot earned him the sobriquet, Owoblow, was full of praises for the John Obuh-tutored side for caging hard-fighting Junior Lions of England in the last match to book a place in the quarterfinals.

'I must congratulate the Flying Eagles on their victory against England. They did wonderfully well and deserved their victory. But I must warn that they should realise that the quarterfinal matches are a different ballgame. The fact that they won the last match with a slim 1-0 margin compared to their previous games, suggests that they must respect every opponent at this stage,' Owoblow began in a telephone chat with Saturday Sunsports.

The Shooting Stars of Ibadan legend further cautioned that the Nigerian flag bearers should not submit to pressures from the fans, but rather remain focused in their quest to bring home the elusive trophy. According to him, the team should not think about the trophy for now, but should take the tournament one game at a time.

'The challenge has become very enormous. We have reached the stage where the Flying Eagles should show character. They must not allow pressures from the fans to distract them. Everybody is talking about winning the trophy, but my candid advice is that they should not think about the trophy for now. They should take the games one at a time knowing that victory over France would take them closer to the trophy,' he explained.

'I must also advice that they should stick to teamwork rather than allow individual interests to derail their ambition. The coach should let the players know that winning the trophy demands teamwork. They must put the nation's interest above their personal aspirations.

'I'm aware that some of the players want to impress the scouts that are in Colombia to watch them. But they should realise that individual play could jeopardize the team's chance of lifting the trophy. Besides, winning the trophy would increase their market value while negotiating new contracts,' he reasoned.

Owolabi further advised Coach Obuh to play the mind game by substituting the players already booked, especially if such players look vulnerable to second booking so as not to risk playing with less number of men.

'Most importantly, the team should not expect that the Colombian fans should continue to support them all through the tournament. They must show maturity and character by holding their heads even if the fans turn against them in subsequent matches,' Owolabi advised.