A MEMO TO WANDE COAL 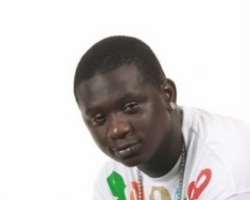 Saturday, August 6, 2011, at the arrival wing of the International Airport crooner Wande Coal and K-switch were spotted arriving Nigeria. Excited fans littered the venue to welcome them back.

This is what an onlooker source reported,” Wande refused to give those airport workers money despite all the hailings from them. When Wande was inside the Prado jeep, those guys were shouting his name by the side of car but there was this bodyguard that was preventing people from getting to him although it was at Wande's order because he was overheard telling one of his bodyguards that the guy messed up by exposing him.

When the bodyguard saw that people were hell bent on getting to Wande, he punched one of the fans and the guy started bleeding from the mouth and nostrils. Nobody could snap pictures with them because they were heavily guarded.

Wande was so arrogant and didn't even wave to people waving and didn't answer people saluting him.

There was no humility whatsoever.

Infact,the fan who was punched in the nose bled so seriously that people began to curse Wande and his guards as they rushed the bleeding fan to the hospital”.