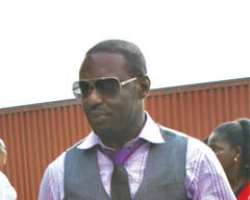 Good God! It's over. At long last, it's all over. After 3 grueling months of ding-dong, snowballing passion, steaming emotions and, of course, nerve-wrecking anxiety, we can all heave a sigh of relief.

Jim Iyke is sure standing tall over all others, with the not-really-bad 695 votes this week and a total of 5,975 votes he's looking good, home and dry, but Desmond Elliot's new found restiveness may be one good reason for him to watch his back.received in the quest to find “Nollywood's Sexiest Man”.

From 18 dashing pieces of God's perfection, it was no meagre task to choose the last 3. I bet no one would query the openness and fairness of this quest. Only one vote was allowed per week per person to weed out any form of influence or rigging.

Though many, in their overzealousness, tried all kinds of antics, some even sending more than 200 votes per week just to vote in a star, but Vanguard discounted them all as we look out not to make money from the quest.

The first set of guys voted out are the last 8 men, which are: Ken Okonkwo at 18th, Hank Anuku at 17th, Linc Edochie at 16th, Bob Manuel-Udokwu at 15th, Yul Edochie at 14th, Tuvi James at 13th, Mcmorris Ndubueze at 12th and Mike Ezuruonye at 11th.

The remaining 10 men trashed it out all the way, falling one after the other, a week after the other, until the 'Final Three”. The 10th spot eventually went to Kalu Ikeagwu, who closed his outing with 337 votes. Next to go was Yemi Blaq, who threw in the towel after raking in a total of 771 votes.

To follow Blaq is Chidi Mokeme, who came, saw and ended with 1,275 votes. Richard Mofe-Damijo followed Chidi a week after, polling a total of 1,564 votes.

For Pat Attah, his fans could take him as far as the 6th spot with a total of 2,596 votes.This left 5 stars still shining in the sky of the quest.

After a period of two weeks' intense voting, Nonso lost out, walking away with 3,144 votes. Ramsey Nouah left immediately after him, pushing only as far as 3,726 votes.

When the voting stopped on December 31, 2008, there was an accumulation of over a week's votes. The final hour between December 31st till Monday, January 26, 2009 (when the winner were presented to the public at our corporate headquarters) saw Vanguard going over the votes painstakingly from the texts, the emails and comments on our websites.

Desmond Elliot came second in the race, while Emeka Ike clinched the third position as the sexist Nollywood actor, going by the SaturdayVanguard's readers' assessments.

Jim Iyke, who eventually could not make it to the in-house ceremony preceding the giving away of prizes to the valuable winners, held at the premises of Vanguard corporate headquarters, in Apapa, Lagos, pulled a total votes of 7810 to beat, Desmond Elliot and Emeka Ike, who pulled 6,805 and 5,570 votes respectively.

Before the D-day, it would be recalled that expectations were somewhat high, as opinions were divergent going by the assessment of the readers of Saturday Vanguard, for 20 weeks running in respect of who would finally wear the coveted crown amongst the three finalists.

While many fans of the three movie stars have ticked Jim Iyke for the crown, following the irresistible love roles he is often addicted to playing while on screen, others indeed, have preferred either Desmond Elliot or Emeka Ike to emerge the star winner.

In attendance also were some notable role models in the likes of the winner of 2006 Next Movie star, Porttia Yamaha and Ambo's Bhaira Mikwizu. Emeka Ike, who came second in the contest was represented at the occasion by his amiable wife, Mrs Ike.

Desmond Elliot, decked with sexy outlook could not hide his feelings. 'I feel highly honoured. Vanguard is actually the only paper that is actually making movie stars what they should be in this country. For me, it was like a joke when I got text messages from the co-ordinator of this contest inviting me over.”

“The contest is good and highly commendable. It's not just about clinching the crown, but more to that, it's all about the desire Vanguard has displayed to honour actors from Nollywood.”he muted, adding that “I am very much elated having made the list at last. I see this gesture as a step in the right direction.”

He was later presented with a 32-inch television set, which was done by the winner of 2006 Next movie star, Portoa Yamaha.

However, Mr. Timothy Etoh, Administration Manager of Vanguard Media Limited, who spoke on behalf of the Management said, in keeping with its tradition of rewarding excellence and professionalism, the company decided to organize the contest as a way of promoting the work of art in this country.

According to him, “as a reader friendly newspaper, we are following what our readers are saying. Vanguard is a people oriented paper. It's a paper for the family and also, a paper that promotes the work of art.” There will be a grand finale for the contest, which holds soon.

I appreciate, I'm sorry I couldn't make it down to the office and that was why I sent my mum and wife straight from the airport to come and represent me. I give God the glory for keeping me sexy at my age.

I thank him for the wisdom and intelligent and all the courage he has given me to remain in that position and for the fact that I did not in any way influence it even if I remain the last man standing.

This is better compared to those, who would rather crucify the artists just to make money or sell their papers. It makes sense and it's better than marking us out or bringing us down. Vanguard spent its money to buy plasma TV for the winners. You have spent money to celebrate models, it is a welcome innovation.

Now, I am a lover of Vanguard Newspapers. I say kudos to Vanguard, lead on, let them copy from you. Ride on, plan more for the movie and music industry. Let's keep having positive packaging for the industry like this so that we can have a progressive and prosperous nation.

It's a landmark achievement — Jim Iyke
•Jim Iyke, Desmond Elliot, •Emeka Ike Unfortunately, I did not start-off with every other person. I was doing a movie in New York when a call came to me through my Public Relations Consultant, informing about the contest.

He described as one of the best things to happen to Nollywood. After giving me details of the competition, I said, fine let's see how it goes. And one thing that arouse my interest was just the fact that Vanguard was involved. We all know, and what Vanguard stands for; promoting excellence and professionalism.

While I was in New York, somebody sent one or two copies of SaturdayVanguard Newspaper to me. I quickly read some of the text messages and comments made by the readers and felt that some of the comments were harsh on me and perhaps, unfounded.

I just thought that the opinions as expressed by the readers regarding the stars involved in the contest should have been detailed. But when I returned to the country a couple of weeks ago some of my fans in Germany, Belgium and America were anxious to ascertain what becomes of the outcome of the competition. At this point, it has become a historic thing. In the cause of the competition, a lot of people's interest was captivated.

While it lasted, I had a lot of my fans who were frequently calling me on phone to furnish me with the progress of the competition.

I don't know how they got my GSM number. But I must confess to you that in the cause of this whole exercise, I sent out one text message that I have never done before in the cause of my acting career.

And it was “Thank you messages” I despatched to all my friends and fans across the globe. It is a worthy experience. For me, it's a landmark achievement.

I feel honoured... — Desmond Elliot
I feel honoured. Vanguard is actually making stars what they should be. I am glad that Vanguard is the first media organization in this country that is recognizing Nollywood stars. I feel highly honoured.

For me, it was like a joke when I got text messages from the co-ordinator of this competition inviting me over.

The contest is good and highly commendable. It's not just about clinching the crown, but more to that, it's all about the desire that Vanguard has displayed to honour actors from Nollywood. I am very much elated that I was among the winners.

I see this gesture as a step in the right direction. I am about 9 years in the movie industry. recently, I set up an NGO called, Desmond Elliot Foundation. The motive behind setting up the foundation is to provide a kind of social amenities to the people at the grass root.

I have been working in the north (Jos). Right now, I am trying to provide water to the people there. Because there are certain areas in Plateau state that lack water supply. Last December, I was able to take some my colleagues to orphanage homes in Liberia and its environs.

What I am presently doing now is to ensure that I secure fund to implement my project. Also, as you want to know, I have started producing my own films I have done three movies already.