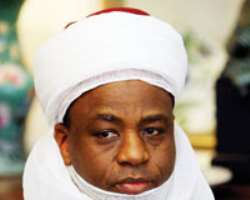 Sultan of Sokoto
Two days into the Ramadan, the prices of common fruits, which are heavily consumed during the period, have risen by between 30 per cent and 100 per cent; a survey of various markets in Lagos by our correspondent has shown.

It was gathered that the prices of banana, orange, water melon, pineapple, pawpaw, apple and other fruits had risen in most parts of the metropolis since the commencement of the fasting period, just as the prices of beverages, had been rising marginally.

For instance, the average bunch of small-sized banana, which sold for N3,000 at the Jakande Fruit Market, Ketu, before the Ramadan, attracted N6,000 on Monday, an increase of 100 per cent; while the big-sized banana recorded an increase of 33 per cent from N9,000 previously to N12,000.

Pineapple, usually sold in dozens, now sells for N1,500 for 12 pieces instead of the N1, 000 it sold for two weeks ago, representing an increase of 50 per cent.

Similarly, the prices of most beverages began rising marginally just before Ramadan began.

Our correspondent gathered that the prices of the different pack sizes of popular cocoa and milk-based beverages had risen by between N20 and N50.

Some fruit traders at the Jakande Market attributed the increase in prices to the fasting period and the scarcity of locally grown fruits due to seasonal changes.

It was also gathered that most of the fruits available in the market currently were being imported from neighbouring countries like Togo and Benin Republic, due to their non-availability locally.

A fruit seller at the market, Alhaja Muibat Badmus, confirmed that the increase in the prices of fruits started with the seasonal shortfall in the quantity of locally supplied fruits, adding that the Ramadan had escalated the situation.

She explained, 'Fruits are now been supplied from neighbouring countries, including Togo and Benin Republic because the season of some of the foods has passed. We also get limited supply from suppliers because of the distance.

'It is normal for prices to rise during the Ramadan period; this is when sellers try to make more profits because Muslims feed more on fruits this period. But on the other hand, the scarcity has also contributed to the increase in prices.'

To meet the huge demand for fruits during the period, Badmus said that there was nothing the sellers could do than to buy what was available.

A pineapple and orange seller, Ms. Fatima Abdullahi, explained that the fruits that used to be supplied from Ogun State were now coming from Togo and Benin Republic.

'Despite the opportunities we have now to make more profit during this Ramadan period, we cannot meet the market demand because of the non-availability of locally grown fruits. Although the prices are up, it will be a lot of advantage if there are more quantities to sell,' Abdullahi added.

Apparently disturbed by the escalating prices, leaders at the Mile 12 Market have set up monitoring committees to ensure that the prices of other food items do not rise abnormally.

According to the Chairman, Management Committee, Mile 12 Market, Alhaji Haruna Muhammed, there has been no difference in the prices of food items before the Ramadan and now, noting that any increase would be due to weather condition in the food producing states.

He said, 'For instance, in the North where they cultivate onion, tomatoes and pepper, the farmers have stopped planting because of the rainy season, they are now planting maize, cucumber, beans and rice, among others.

'The management of the market has met with all sectional heads in the market to announce to their members that no increase in price will be tolerated in the name of Ramadan. Necessary penalties have also been put in place for anyone who undermines this instruction,' Muhammed said.