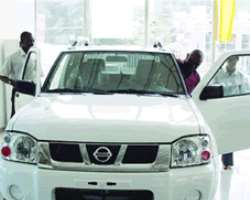 •Nissan vehicle
Following what looked more like a 'toughening', than a presentation, ceremony recently in Johannesburg, South Africa, the new Nissan NP 300 light truck is poised to hit the Nigerian market towards the end of next month. With the attributes of both a tough off-roader and a passenger car, the kid on the block will be driving in confidently, having been tipped as having what it takes to upset the status quo in the pick-up segment of the market.

The imminent arrival of the vehicle was confirmed early in the week at Alliance Autos Nigeria Limited showroom on  Adeola Odeku, Street, Victoria Island, Lagos, where  the Marketing Manager, Mr Hapreet Arora,  told Daily Sun Motoring that the new pick-up occupied a very vital spot in the Nissan dealership's reinvigorated onslaught aimed at giving the popular global brand its deserved place in the local market, especially in the light commercial vehicles' segments.

This ambition by Alliance Autos perfectly dovetails into the strategic plan  unveiled by Nissan South Africa (PTY) Ltd. as part of a series of activities held recently in Pretoria and  Johannesburg to draw attention to the on-going expansion of its new light commercial vehicles (LCV) range. Salient in the long-term (six-year) plan as enunciated by the Managing Director, Mr. Mike Whifield, is the production of many new top quality vehicles the customers in various markets across Africa, including Nigeria, will be pleased with.

The NP 300, alongside its younger sibling, the NP 200, is joining older and bigger class-beaters like the Nissan Patrol pick-up and Nevara but the pick-up has come a long way to its present all-new look. Originally called the Hardbody in South Africa, NP300 now offers improved value-for-money package for buyers, plus enhanced comfort specification, safety features and performance, all of which were confirmed during the test-drive, special 4×4 demonstration and simulations of real driving situations.

Here is breakdown of the NP 300 nomenclature: While 'N' stands for Nissan, 'P' represents pick-up, just as 300 is a continuation of the brand's model serial.

Considering the series of rigorous driving challenges they threw at the vehicle, it was clear that the hosts were bent on proving  a point: That the NP 300 is not an ordinary pick-up but one that has all it takes to  challenge the dominance of some of its competitors in various markets like Nigeria. And trust the auto freaks in attendance, made up of motoring journalists and dealers' representatives from across Africa; They took turns to challenge the new pick-up at each stage of the long motoring experience with the Managing Director of Alliance Autos, Mr Ian Middleton, showing what an expert he is behind the steering - deftly manouevring the pick-up through plastic cones at an appreciable speed, reversing and neatly parking the vehicle within a given time frame and winning a price at the end of the day.

A confirmation of the high premium Nissan South Africa (and Alliance Autos) places on the pick-up came through Mr Jim Dando, General Manager, Africa Regional Office, Export Sales. He disclosed in a chat with the Nigerian journalists attending the LCV event, that Nissan intends to be more visible in Nigeria with the right vehicles, having realised that Nissan can offer even better products than what the competitors have that have kept them ahead in some cases.

Dando remarked: 'When we look at the commercial segment in Nigeria, we see that most products are in the high class pick-ups, made up of 4×4 double cabin, small capacity gasoline (petrol) engine, but  with ABS, airbags, bluetooth and radio  and the kind of luxury, which we are also about to make available in Nigeria especially (through the NP 300 and other modern Nissan pick-ups).' 'We believe that, that is the product that can go after Toyota product and it will be offered at the right price and we believe we have the same luxury level that Toyota has, and thereby making us rival competitors. It will be interesting to note that we have received the first pre-shipment order, the manufacture of which started off in May and the first order shipment will be arriving Nigeria sometime soon'.

Coming to Nigeria with a 2.4 litre  engine  under its bonnet, and having a gross mass  of  2730 kg, the vehicle is being predicted to rely on its strength, functionality and an array of features to endear itself to the discerning members of the Nigerian pick-up buying public who want a pick-up that can give them performance without draining their pockets..

Interior features of NP 300 include, but not limited to:  Enhanced power, safety and visibility combined with essential cabin comforts like power windows, a tilt-adjustable steering column, dual airbags, air-conditioner and additional storage space in double cab model Alliance Autos will be introducing next month.

NP 300 is not all cabin space, strength and comfort.  Get ready to give it kudos for  higher ground clearance that allows for extra all-round visibility, a solid single frame chassis that absorbs the force of impact from the front, and impact crease folds that minimises impact in the cabin,

Sources at  Alliance Autos and Nissan South Africa say the duo are not unaware of how vital  the price factor is in introducing a new vehicle into a competitive market, hence care is being taken not to price NP 300 beyond the very people it is being brought in for.

Dando also confirmed this: 'This is in an effort to bring the vehicle to the market at a very competitive pricing. Of course, pricing is a very difficult thing to achieve suddenly but we have different costing activities to try and reduce the price of our pick-ups in particular, so that we can become really competitive in Nigeria'.