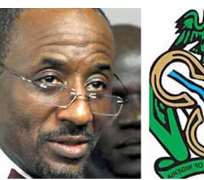 CBN Governor, Lamido Sanusi
The Supreme Council for Sharia in Nigeria on Sunday threatened that Muslims would rather go to war than give up on the current move by the Central Bank of Nigeria to promote Islamic banks in the country.

The SCSN also warned Christian clerics to stop disturbing Muslims, whom it said had received enough abuses since the controversial banking system came to the front burner of national discourse.

Vowing that Muslims would defend the implementation of the Islamic banking system (also known as non-interest banking), 'with the last drop of their blood,' the council also urged the Federal Government to call Christian leaders to order.

The SCSN President, Dr. Ibrahim Datti Ahmad, read a statement issued at the end of a meeting of the council to journalists at the Arewa House, Kaduna.

The council said, 'Jaiz bank has come to be and there is nothing they (Christian leaders) can do about it and if we have to go to war on this, we'll go to war.

'Let those wearing cassocks stop disturbing our peace. Gentlemen (journalists), being peaceful doesn't mean we are cowards. We warn them to stop disturbing our peace if they want us to live together in Nigeria. Everybody can go his way; we don't have to live together. We can't live under people dictating to us how we should live our lives even within the laws of the country.

'Whatever they call themselves, whether archbishops, priests or whatever they are, let them stop disturbing our lives. We have had enough; let the government warn them because these abuses are enough. We have been patient but there is a limit to what we can take. On this Jaiz bank, there is no going back. Everything has been done according to the law.

'We'll meet fire with fire if they make the Jaiz bank impossible. Let them leave us alone. If they want us to live in Nigeria peacefully as we want to do, then let them respect our rights as we concede to them their own rights.'

It added that if Christians wanted a bank to serve their interest, they were free to ask the CBN for one instead of opposing the proposed Islamic banking which 'is operational in the United Kingdom and other Christian-dominated countries.'

The council added that the Jaiz bank had assured that it would commence operations in Nigeria in September with three branches in Abuja, Kaduna and Kano.

The SCSN said,'We are very happy that with a lot of efforts Jaiz bank has now become a reality. The company owning Jaiz has assured us that the bank is coming in September and they have assured us that they will be starting with three branches in three towns, namely Abuja, Kaduna and Kano.

'And they will continue to open the branches rapidly thereafter. We are also aware of the amount of noise and nonsense we hear from the Christian leaders, some of whom are so ignorant.

'They think they can blackmail the government, the CBN or the Muslim ummah to abandon the project. We want to assure them that nothing can stop the Jaiz bank from coming into being because it's being brought in according to the laws of Nigeria. There is nothing illegal about it.

'We, the Muslims of this country, are fed up and tired of the vituperations of the CAN (Christian Association of Nigeria). They feel they can dictate to the Muslims, even on how we should live our lives.

'And we are warning the government not to listen to them because there is a limit to the amount of nonsense we can take. We are the majority in this country, whether the Christians like it or not.

The Sharia Council also alleged that the post-presidential election riots in Kaduna and other parts of the North were premeditated in Southern Kaduna long before the conduct of the polls.

Efforts made by our correspondent to get the reaction of the President of CAN, Pastor Ayo Oritsejafor, were abortive, as he was said to be out of the country.

The SCSN also faulted the manner in which the crisis was handled by the Federal and state governments, alleging that a curfew had been imposed on the northern part of the state while the southern part remained free.

It said, 'This reality is supported by the fact that Southern Kaduna Muslims were massacred even before the election results were announced. Whatever happened was a reaction thereto. The refugees were left to cater for themselves. In fact, most of them were compelled to leave the camp.

'The government must restore people's freedom, compensate them fully and return them to their homes.'

The council also spoke on the security challenge in the country, especially in Borno State, saying that 'the activities of the Joint Task Force in Maiduguri were most unfortunate.'

It accused the JTF of 'using an unbalanced force in its attempt to restore peace and order to Borno State.'