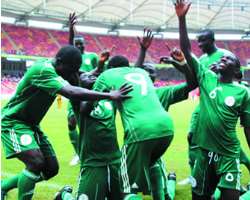 As the nation rues last Sunday's Dream Team V's loss to Black Meteors of Ghana ahead of the 2012 All Africa Games (AAG) in Maputo, Mozambique, ex international, Felix Owolabi, says the ouster holds two vital lessons for administrators of the game in the country.

The Dream Team V as the Augustine Eguavoen tutored Under-23 side is best known, was downed by 2-0 in Kumasi Ghana, losing 3-3 on aggregate on account of away goals rule after the score line in their first leg game in Benin stood at 3-1.

Early in the week, the team trudged into the country and went underground, but angry Nigerians have been expressing anger and disgust following the defeat. While a section of the stakeholders are calling for the a rejuvenation of the team ahead of crunchy qualifying games for the London 2012 Olympics, some are calling for the disbandment of its playing staff and the coaching crew.

But Owolabi, a member of the 1980 Africa Nations Cup winning squad emphatically says the telling truth the Ghana debacle holds for the country is that administrators of the game must get down to doing things right as Ghana is currently doing. He is also of the strong opinion that for the country to play in London next year, and in subsequent international competitions, the administrators must begin to believe in the local league and to do something urgent to make it blossom.

'The Dream Team V's loss in Ghana has its root in the country's over bearing reliance on foreign-based professional footballers. Now, we could see where this has landed us. For the fact that their foreign clubs failed to release them to us we crashed.

'What that tells us in clear terms is that the future of our football lies in the domestic league. If a greater percentage of the Dream Team V players were in the local league, we probably couldn't have got it this bad.

'Look at Spain that won the last FIFA World Cup in South Africa, almost all their players play in the domestic league - the Spanish La Liga. But here, we place over emphasis on foreign-based players.

'Now, the question is what are we doing to rejuvenate our local league?

'If you look at what the administrators are doing currently, you will realise that none of them has the interest of the game at heart. Every one of them is selfish, selfcentred and self seeking. That is why when they get into office, they don't do anything for the good of the game. They are killing our football and that is why we have found ourselves where we are at the moment.

'For now, we have to come out of our mourning and embrace the second lesson in our loss to Ghana and that is, that country is doing things we are not doing here. Their administrators are doing uncommon things, which are giving them this clear edge over us, and we can't deny it. It is a pity that we have continued to lose to them in recent times.'

He observed that the ticket to play at the 2011AAG was one that could have gone either sides because in football, a team either wins or losses, noting that what was important now was for the country to get things right in future.

'In football, it is either you win or lose' the former Nigerian Premier League (NPL) board member asserted. 'When you are playing, you simply hope for the best. You commit all that you have into the game and then see how things turn out. If you fail to win, you go back and prepare for the future. That is why we must not over dwell on the Dream Team loss in Ghana. We must take away something from that painful crash as the country prepares to challenge for a ticket to play at the next Olympic Games. That is the lesson we must learn right now,' he concluded.