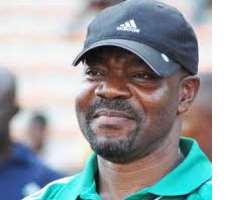 Eagles are currently in Panama fine tuning strategies for the FIFA Under-20 World Cup starting July 29 in Colombia. The Nigerian team are top contenders and one major survival strategy to be employ by the coach John Obuh, is a fast forward attack.

Obuh plans to field an offensive team that will attack with confidence. This was what propelled the Nigeria Under-17 team to the final of the 2009 FIFA World Cup. Most of the silver medal winning team are in the Flying Eagles with Obuh is having little trouble passing down his philosophy to the players.

'In most of the competitions we have taken part in, we have usually emerged as the top scorers,' Obuh declared.

However, coach Obuh cautions that the the Under-17 and Under-20 are 'quite a different ball game' and that the Flying Eagles are going to have to up their performance to reach such heady heights again. 'Players at U-20s have mostly all had experience playing at senior level for their clubs, and some have even played for their national teams, which makes it a lot more intense of a competition in comparison to the U-17s,' he explained.

It means, as Obuh insists, that past form is nothing to go by, as well as explains why his reaction to the seemingly favourable draw for his side in Colombia lacked the expected enthusiasm. 'I had no different a reaction to this draw than I had to all the other draws,' he said from Nigeria's pre-tournament training base in Portugal.

'I have always maintained that football these days is so unpredictable and there has been so much development that no opponent can be seen to be weaker than any other.'

I try as much as I can to emphasise to the players they must learn to take one step at a time. They really need to concentrate on the job at hand at the tournament and then worry about getting a contract overseas.

Nigeria coach John Obuh on players using the World Cup as a showcase to find new clubs Obuh, who continued to add to his list of achievements by winning the African Youth Championships in South Africa in May, will see his charges go up against Guatemala first in Group D, in the town of Armenia, and then play Croatia and Saudi Arabia.

It seems a promising draw, but Obuh has concerns over the focus of his players. 'We are always seeking the best out of everything we do and there are players who have the added motivation of using the world championship as a stage to tidy up offers of contracts with clubs in Europe. None of them want to stay in the local league,' he explained.