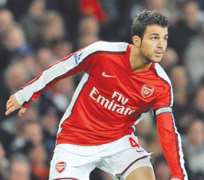 Fabregas
Barcelona midfielder Xavi has revealed Arsenal captain Cesc Fabregas told him he was 'suffering' because of his desire to join the Catalan club.

The transfer saga of Fabregas returning to his former club has been one of the most protracted, ongoing rumours in modern football but Xavi reckons his compatriot has made his preference of a return to the European champions clear.

Xavi told Barcelona's official website, 'I spoke to Cesc in Ibiza and he said he was suffering because he wanted to come. It's more like, he did everything he could to come and wants to leave Arsenal - although he made it clear that now everything depends on the selling club.'

Fabregas, 24, is a product of the Barcelona youth system but joined Arsenal in 2003 and has since become a key figure at the club.

Barca coach Pep Guardiola earlier revealed he hoped there would be progress in the pursuit of Cesc Fabregas before the end of the week.

Guardiola is reported to be unhappy with Barcelona president Sandro Rosell for his failure to sign Fabregas earlier in the summer, but is certainly hoping for an imminent update on the situation.

'Now the situation about moves for reinforcements is very complicated, but I'm hopeful in the next few days it will become clear,' he said on Catalunya Radio.