ESSIEN OUT FOR 6 MONTHS 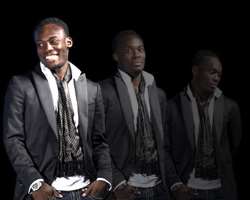 LONDON, (AFP) - Chelsea midfielder Michael Essien could be out for up to six months following surgery on a knee injury he suffered in training last week, the Premier League club announced Monday.

The Ghana international had an operation to repair a ruptured anterior cruciate ligament and meniscus following a right knee injury.

Michael Essien
According to a Chelsea statement, 'the surgery was successful and Michael's full recovery could take up to six months'.

Chelsea manager Andre Villas-Boas added: 'Everyone at Chelsea wishes Michael well for his recovery. His team-mates and all the staff and I look forward to helping him return to playing as soon as possible.'

Essien's setback is the third serious knee injury of his career and represents a blow to the Blues as they look to regain the English title from Manchester United after finishing a distant second, by nine points, to the champions last season.

In a statement, Arsenal said the 24-year-old would arrive from Lille, whom he helped to a French league and cup double last season with 15 goals in 40 games.

He also captained the Ivory Coast in the 2008 Olympics in Beijing and represented his country at the 2010 World Cup, scoring twice in three substitute appearances during qualification for the finals.

So far, he has scored six goals in 27 appearances for his country.

Gervinho will arrive at the London club at a tricky time for Arsenal, with long-serving French manager Arsene Wenger under pressure to deliver a trophy after six years without silverware.