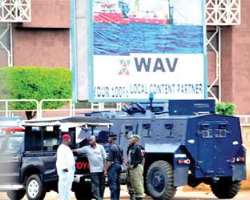 An Armoured Personnel Carrier at the headquarters of the Nigerian National Petroleum Corporation, NNPC Towers, in Abuja … on Sunday.

Nigerian National Petroleum Corporation in Abuja is the next target of the Boko Haram fundamentalists, intelligence reports gathered by security agencies indicated.

A lone bomber suspected to be a member of the Boko Haram on June 16 attacked the Nigeria Police Headquarters, Louis Edet House, in the Federal Capital City. One policeman and the lone bomber died in the attack in which 33 vehicles were burnt and 20 others destroyed.

Our correspondent who visited the NNPC Towers, located on Phase 2, Herbert Macaulay Way in the CBD, observed a police armoured tank deployed at the front of the building while armed riot policemen and soldiers were seen surrounding the building.

A top security source confided in our correspondent that the police authorities got a hint of a plan by the group to bomb the building as part of its violent campaign against the Federal Government.

The group followed the attack on the police headquarters with another on a drinking joint in Maiduguri, Borno State capital, two weks ago. Twenty-five people were killed in the attack.

A riot policeman on duty at the NNPC Towers (name withheld) told our correspondent that the security personnel at the building were hurriedly deployed.

'We (policemen) were asked to report to the NNPC Towers by our DPO because Boko Haram people are planning to bomb the building.

'The intelligence just came in, so we had to hurriedly come down here,' the policeman said.

He bemoaned the incessant threat posed by the Boko Haram members and the seeming ease with which they had been carrying out their attacks.

President Goodluck Jonathan, during a recent visit to the bombed police building in Abuja, said if the Boko Harams had had their way they would bomb even him.

The planned bombing of the NNPC building came as the re-appointed Minister of Petroleum, Alison-Madueke, returned to her seat today, having been sworn in last Saturday along with 13 others by the President.

Alison-Madueke and 11 other ministers who were sworn in were asked by Jonathan to go back to their former offices.

The Chief of Army Staff, Lt. Gen. Azubuike Ihejirika, had vowed that the Army would crush Boko Haram in line with a directive from the president.

The lone bomber launched the attack on the Louis Edet House barely three days after the Inspector-General of Police, Mr. Afiz Ringim, had threatened to crush the sect.

Ihejirika described the attackers as cowards, stressing that the fact that they succeeded in igniting some explosives in some parts of the country did not make them invincible.

The COAS therefore called on Nigerians to be security conscious and to give security agencies information that would assist them combat the group.

He spoke at the Second Quarter Chief of Army Staff Conference in Abuja last Monday.

'Nigerian Army having studied the method of operation (in collaboration with other security agencies), very soon the country will notice improvement and new security agreements,' the Army chief had said.

Not less that 3000 soldiers had been dispatched in the last two weeks to Maiduguri, the Borno State capital, to fortify military formations in the state. The deployment of the soldiers for internal security, our correspondent gathered, had led to the depletion in the rank of soldiers needed for peace-keeping operations abroad.

Also, the FCT pedestrians and motorists had also been subjected to serious security checks at security stop-and-search operations jointly set up by policemen and soldiers.

The Islamic sect had earlier threatened further attacks in the northern part of the country as well as the Federal Capital Territory.