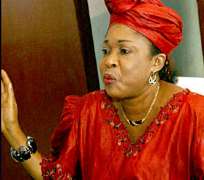 Although details are sketchy for now, but is confirmed that, Chief (Mrs.) Christy Essien-Igbokwe the lady of songs and former President of Performing Musician of Nigeria, PMAN, is dead.

We learnt she died today after a brief illness.

NO ONE LIKE HER: A TRIBUTE TO THE LADY OF SONGS. Christy Essien-Igbokwe (m) singing with Yeka and Naomi during the Idol grand finale.