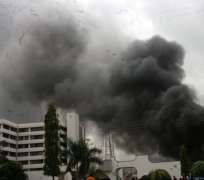 What is worse than recent bombings in Abuja and other places in Nigeria? The answer is:

1. The refusal of Nigerian pundits, leaders, officials and ordinary people to recognize the real problem and motivation of the terrorist-bombers.

1. The denial by Nigerians of the actual reason given by the terrorist bombers for their obviously dastardly and unjustifiable bombings

1. The tripping all over themselves of Nigerians to advance trite and useless solutions which may sound reasonable or even logical, but are nevertheless entirely inadequate because they are based on the wrong assumptions or assertions; and on the denial of the facts on the ground.

1. The predictable implementation of useless, powerless and expedient responses by the government and peoples living in Nigeria.

1. It means that only more desperate violence and ever more lethal action will determine how soon and what terminal condition Nigeria will assume prior to the inevitable demise and breakup of a structure that has never really worked and which only brings anguish to all.

1. By the time the inevitable happens in Nigeria, there will have been a total subtraction of goodwill among the peoples already suffering collectively and individually due to the dysfunction of Nigeria. How would one spell, “Hell”?

It is not a diversion to note here that as long as Northern Muslim ruled the whole of Nigeria through first a rigged “first republic” Parliament, subsequently through successive military governments; and acted their “born-to-rule-Nigeria” role and agenda with unbridled arrogance and treated entire Nigeria like it was one Muslim harem, there was no need for Boko Haram. With such headiness, Nigeria was formally registered (unilaterally) by the born-to-rulers as a member of the Organization of Islamic Conference (OIC), something reserved for purely Muslim nations. Nigeria was not allowed to function even nominally as a secular state: it was an Islamic nation to them. Sensing that contemporary Nigeria, even with openly riggable, bloody, threat- and intimidation-susceptible electoral process, is slipping out of their control, Northern Muslim leaders have been quietly and stridently encouraging a “jihad,” where another military coup was ruled out of the question because this time around, the South would not remain passive. Boko Haram was their answer.

Unfortunately and characteristically, Nigerian leaders in their wishful thinking do not want to take them serious. Rather, they delude themselves by believing that they can “negotiate” = buy off or bribe Boko Haram (like they did with MEND), pretending that Boko Haram’s desires and goal are not serious or genuine. Even with this unconscionable escalation of the Boko Haram terrorism, Nigerians are still expressing doubt and disbelief that a Nigerian could actually engage in suicide-bombing; clearly, he could only have been brainwashed somewhere else, say, Somali or Yemen: they don’t want to accept the facts. Such denial! Boko Haram’s Northern Muslim leader-backers and instigateurs pretend that they do not know what is going on. Thus, not surprising, no one is seriously addressing what Boko Haram have stated as their goal and how far they will go to get it, a disastrous underestimation.

It is predicted that as the next step, all the armed forces of Nigeria will go after Boko Haram (again), and there might be a lull wherein the Nigerian government will claim victory (again) and the peoples will again dutifully obey instructions to “return to [their] normal business” afterwards. But, it will only be a matter of time before Boko Haram strike again, and again, with escalation. It may even turn out that the Northern Muslim leadership will instruct the Muslim in Nigeria’s armed forces not to participate in any counter-attacks against Boko Haram by the government of Nigeria; then, any attacks at all by the government will open up a mutinous war within its ranks.

Is it a secret that different ethnic nations in Nigeria have determined groups seriously asking for their independence or Self Determination? No. Some are not employing violent means, but actually are the ongoing victims of violence as a consequence of their cause and pursuit, inflicted on them by self-priding Nigeria Police. All these groups are asking for the restructuring of Nigeria, to be based on the wishes, desires, determination and mutual agreements among the ethnic nations represented by the groups, with regards to what types of relationship should prevail among them now and in the future. As abhorrent and unacceptable as the Boko Haram methods, means and actions are, and as devious as the original intent of the Northern Muslim leaders who incited them was, their goal of gaining control over their own specific territory—actual Muslim North, not entire Nigeria—is thus shared with other groups. It is a goal which can only be achieved by the restructure of Nigeria. However, Nigerian leaders have refused to pay serious attention to this across-the-board popular demand. They are in complete denial, just as are Nigerian pundits.

Predictably, Jonathan will do the wrong thing, following the paths of Yar’Adua, Obasanjo, and Gowon before him. Gowon came to power through a putsch with the directive and goal of secession of Northern Nigeria (mirroring what Boko Haram is seeking 45 years later!). He had no problems or doubts asserting and declaring that there was no basis for the unity of Nigeria, which is a most accurate statement, then as now, as well as in the future. Yet, he quickly ignored every fact and reality, rejected the Aburi formula for the restructuring of Nigeria and rather dragged Nigeria into a genocidal war against Biafra who fought back in self-defense while he wanted to “keep [the same un-unitable] Nigeria one.” That blunder has cost Nigeria dearly, reducing it to a mere cripple and the failed nation that it is now, setting the stage for today’s bloody agitations.

What about Obasanjo? Obasanjo had a real chance to convene a restructuring conference of ethnic nationalities during his tenure as president of Nigeria. But, he was more interested in using brutal force to subdue aggrieved groups, and when eventually compelled to do so by public outcry demanding such a conference, he pre-empted the popular conveners and rather substituted his own warped version which had no resemblance to the goals and objectives and intent of the original proposition. With that chance lost, Nigeria went back to its usual trajectory of denial and senseless headlong plunge into the abyss. Today, Obasanjo admits that he is afraid of a revolution in Nigeria, which he predicts will victimize him personally for failing to do the right things when he was in power. Brilliant deduction, General Obasanjo!

Where force and feint failed to work for Obasanjo and Nigeria, Yar’Adua’s force with bribery and pay-off coupled with “Amnesty” seemed to work to settle Niger Delta restiveness—but no one who understands the history of Nigeria expects this solution to work for much longer. In any case, it will not work for Boko Haram where Jonathan will now try the same combination. For one, even though “Amnesty” has an appropriate application here, Boko Haram members have no remorse and do not consider themselves in need of Amnesty. Second, Boko Haram members will not accept any payments, period, least of all, for personal interest or development. If they accept money, it will be only to use such funds to expand their arsenal, expertise and operational sphere of violence.

Lastly, unlike the typical Nigerians, Boko Haram members are not afraid to give up their lives—in fact welcome such—in search of their goal; so, Nigerian government’s threat or actual use of force does not intimidate or worry Boko Haram, while it is still quite likely that the Northern Muslim leaders will not stand by and watch this happen. Ultimately, the reason for the guaranteed failure of Jonathan and Nigeria’s approach is the failure to address the basic issue of entire Nigeria: absolute need for restructuring.

Therefore, the overall situation in Nigeria now is worse than the condition created by the bombings. As long as Nigerians are shrill in their calls for beefing up security as the main solution, and only task their government to do something about such security (a tall order in itself, ordinarily), they miss the boat and the status can only become worse. What Nigerians can do right today is find the courage to call on their leadership, including the Presidency, to convene a conference of the different ethnicities to decide the future of Nigeria. Restructure!

Jonathan, even if he had the inclination (of which he had declared otherwise earlier), cannot order or initiate such a conference all by himself as the President. After all, even foreign government-stakeholders (read, selfish foreign interests) advise him to “keep Nigeria one”—just like they did with Gowon. But, if the peoples ask for it, demand it, and insist on such, Jonathan will have no choice but arrange it, having also previously gone on record stating that he will carry out the wishes of the peoples. If the peoples could force Obasanjo before him to make a sovereign national conference happen, they can too get Jonathan to arrange a real one now. In short, Jonathan, with the initiative, mandate and support of the peoples, can bring about the much needed conference.

A conference of the sovereign ethnic nations to assert each its own destiny, re-work inter-ethnic national relationships among themselves, and decide together the fate of Nigeria is the answer to “…those who make peaceful change impossible only guarantee a violent revolution…” That’s the solution to “any” form of Boko Haram—be your own, be on your own, and let’s all mutually respect that. Nigeria’s problem is structure; security (lack thereof) is only a warning sign, a mere, though potent, symptom, like corruption also. Ignoring the problem and focusing exclusively on the symptom alone invariably results in a worse condition than that caused by the symptom.

It is no longer a matter of whether Jonathan will do the right thing: it’s more a matter of if the peoples cowering in Nigeria will do the right thing for their own survival, as such to “lead their own ‘leaders’” into appropriate action. It’s really up to the peoples: a conference of the sovereign ethnic nations, now, to restructure Nigeria. Anything else produces a worse condition than the bombings.

It is high time the peoples suffering in Nigeria really decide what is in their own best practical and life-interest. Do the peoples decide to miss this opportunity and continue the slide into deepening and widening endless bloody violence, perpetual fear and insecurity, and paralyzing dysfunction? Or, do they decide and want to exercise the choice to break the cycle now by breaking the structure which breeds, supports and spreads the pernicious conditions? Each one has got to ask himself or herself, and then collectively, with future generations especially in mind: do we really want to “live” in a Somali-type perpetual terrorist-state called Nigeria, by forced association; or can we protect ourselves, our own respective way of life and life-view, our children and our posterity by reclaiming each our own particular natural sovereignty, identity and loyalty, by whatever name, so to live and project what we respectively truly are—each our own respective collective Destiny—and be accountable for such? Anything but the latter only produces a worse condition than the bombings.