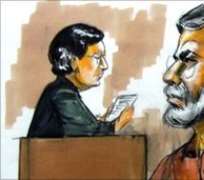 Tahawwur Rana denied all the charges during the trial

A US jury has convicted a Chicago businessman of supporting an Islamic militant group blamed for the Mumbai attack in 2008.

But Tahawwur Rana, 50, was cleared of the more serious charge of helping plot the attack that killed more that 160 people in the Indian city.

The Chicago jury also convicted the Pakistani-born Canadian of helping an aborted attack on a Danish newspaper.

Rana is expected to be sentenced later and faces up to 30 years in prison.

Correspondents say the trial gave a rare glimpse into the workings of the Pakistani militant group Lashkar-e-Taiba (LeT), which was blamed for the Mumbai attack.

Star witness
The jurors at the federal court in Chicago reached their verdict on Thursday after two days of deliberations.

They found Rana guilty of providing material support to LeT.

But he was cleared of involvement in the Mumbai attack, in which 166 people died after group of militants stormed a train station, hotels, cafes and a Jewish centre, shooting and throwing bombs.

Rana was also found guilty of providing material support to a plot to bomb a Danish newspaper, Jyllands-Posten, which had published cartoons of the Prophet Muhammad. The plan was never carried out.

At the centre of the trial was testimony by the government's star witness David Headley, once Rana's close friend.

Headley had previously pleaded guilty to laying the groundwork for the Mumbai attacks and helping plot the attack against the Danish paper.

Scouting sites
During the trial, prosecutors argued that Rana had allowed Headley to open an office of his Chicago-based immigration services firm in Mumbai, which Headley then used as cover to scout sites for the attacks.

The prosecutors also said that Rana had allowed Headley to pose as a representative of his firm in order to gain access to newspaper offices by feigning interest in purchasing advertising space.

Rana's defence team argued that he had been manipulated and misled by Headley, an old friend from their days in a Pakistani military school.

At the opening of the trial last month, Headley also testified that Pakistan's Inter-Services Intelligence agency (ISI) had provided military and moral support to LeT.

Pakistan has denied the allegations.