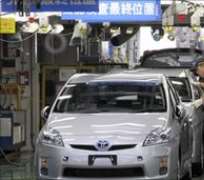 It said revenues would fall slightly to 8.2 trillion yen.

Toyota has said it hopes to return to 90% capacity in Japan this month.

Earthquake impact
Profits in the first half of the year would be hit particularly hard, the company said.

Thereafter, business is expected to pick up, although the effects of the earthquake and resulting tsunami would be felt for a long time, the world's largest carmaker said.

“The Japanese economy is expected to pick up gradually. However, the damage done by the Great East Japan Earthquake was widespread and serious, and will continue to affect the Japanese economy,” the company said.

It added that emerging markets should continue expanding, particularly China and India, while more developed economies such as the US and those in Europe should “continue recovering at a modest pace”.

However, it highlighted rising oil prices and high unemployment, particularly in the US, as key risks to future sales.

Slipping sales
Toyota said it expected to sell 7.24m vehicles during the full year, with 2.92m of those sold in the first six months.

As a result of the earthquake, Toyota is likely to lose its position as the world's best-selling car brand, a position it has held since 2008.

Some analysts have speculated that it may even slip to third place behind Volkswagen, due in part to issues that existed before March's disaster.

“Toyota is in a period of restructuring its production after years of expansion,” said Kazuyuki Murai at Plaza Asset Management in Tokyo.

“It is still not equipped with the ability to deal with rising demand in emerging markets. I think Toyota will be in for a sluggish period.”

The earthquake also hit the carmaker's performance during the last financial year, with profits between January and March down 77% to 25.5bn yen from a year earlier.