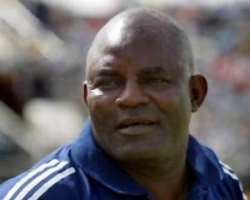 Chukwu, captain of the 1980 Nations Cup winning squad will coach the Super Eagles' All-Stars against Keshi's Friends of Kanu, which will comprise foreign players invited from outside Nigeria.

Keshi was captain of the squad that lifted the only African Cup of Nations title that Nigeria have won outside their shores in Tunisia in 1994 and qualified Togo for the 2006 FIFA World Cup finals in Germany.

Organisers of the testimonial match have indeed found fitting coaches for a game in honour of the most decorated footballer to have come out of Nigeria.

Chukwu will be assisted on the home team's bench by two other ex-internationals Ganiyu Salami and Solomon Ogbeide. Keshi will be supported by Joe Erico and Monday Odigie.

Salami and Erico have been assistant coaches of the senior national team at different times. Erico was Nigeria's number one goalkeeper for many years, including being in goal at the 1976 African Cup of Nations in Ethiopia.

Others are Kanu's former teammate at West Bromwich Albion, Hermann Hreidarsson, Algeria's Madjid Bougherra and Togo Captain Emmanuel Adebayor. Zambia's Kalusha Bwalya, the 1988 African Footballer of the Year, now President of Zambia FA and a current member of the CAF Executive Committee is also expected to be in Lagos.

Super Eagles coach Samson Siasia will be among the Eagles' All-Stars alongside Mutiu Adepoju, Augustine Eguavoen and Daniel Amokachi.

The Nigeria Football Federation has also appointed Dr. Ahmed Tijjani Yusuf, a two-time Secretary of the federation, as Match Commissioner for the encounter.