NO JOKES IN ETHIOPIA -UCHE 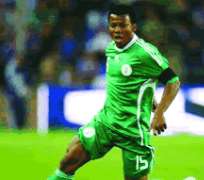 Super Eagles' lethal striker, Ike Uche, is not letting his brace over Argentina to becloud his desire to take the battle to Ethiopia in the Africa Cup of Nations qualifier in Addis Ababa today.

The striker, who was named the Most Valuable Player (MVP) of the Nigeria, Argentina international friendly, said while he's happy with his performance in the match, credit should go to his teammates for providing him with the passes and that he looks forward to another sterling performance against Ethiopia today because it's a very important game for him.

He said that it's bad enough for him to have missed the Africa Nations Cup in Angola and the World Cup in South Africa in 2010, but that he's glad his return to the national team had remained a worthy one.

'I thank my colleagues for being there for me. I can't take credit for my performance because without them, I couldn't have made it,' said the Real Zaragoza striker.

'It's good we won against Argentina. It'll give us confidence going into the game against Ethiopia.

'I'm happy that I scored today (on Wednesday), but it wasn't just about me. The team played well and worked hard and I scored. It wouldn't have made any difference if any of my teammates had scored while I assisted him.

'It's the early goal that really gave us the needed confidence to settle in and play a good game. For me, I just wanted to see the team win the game even if I didn't score. Mine was to contribute to the success of the team,' he said. The Super Eagles took the lead through Ike Uche after barely 10 minutes and doubled their lead against a lacklustre Argentina 15 minutes later when Victor Nsofor converted a soft penalty.

Uche then grabbed his second when Argentina, once again, failed to deal with a Taye Taiwo surge down the left wing, leaving Batista's men to go in at halftime facing the prospect of a real trouncing.

Emanuel Emenike added a fourth in the second half before Mauro Boselli grabbed a consolation for Argentina deep into injury time when referee Ibrahim Chaibou inexplicably awarded a penalty against the home side.

Meanwhile, in the Africa Nations Cup qualifier, Nigeria trails Group B leader, Guinea by a point after three matches and would have to win today in Ethiopia to at least stay within touching distance of the Syli Stars.

With only the group winner assured of automatic ticket to next year's Nations Cup in Gabon and Equatorial Guinea, Nigeria cannot afford to drop any more points before the Eagles host Guinea in their final game in October.

In the first leg encounter, Guinea won Nigeria by 1-0 courtesy of an early Kevin Constant strike in September last year. That result has continued to haunt Nigeria ever since then. And Guinea could have widened the lead at the top of the table in March, but bottom team, Madagascar, did Nigeria a big favour by holding the West Africans to a 1-1 draw in Antananarivo. However, the Syli Stars are expected to win their next two home games, against Madagascar today and then in September against third placed Ethiopia.

It simply means that Eagles are expected to get a result on the road against the team they bashed 4-0 in Abuja about two months ago to have the hope of qualifying for the Nations Cup. 'We have to win in Ethiopia,' declared Eagles Coach Samson Siasia matter-of-factly. And to demonstrate how much he values his statement, the coach has vowed to stand against anything that would derail his vision. He axed in-form West Bromwich Albion striker, Osaze Odemwingie for walking out on the team in March.

Sudan-based defender, Yusuf Mohammed has pulled out of today's match because of injury.