IKHANA BANKS ON SANUSI AGAINST HEARTLAND 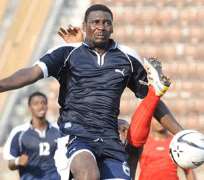 Heartland defenders are certain to have full hands against Kwara United's consummate striker, Kabiru Sanusi, when both sides clash tomorrow inside the Dan Anyiam Stadium in Owerri in one of the exciting fixtures of Week 25 of the current Nigeria Premier League season.

The stocky striker, who has netted 10 goals in less than 13 matches, looks to increase his tally against a star-studded Heartland team that has been anything but impressive in the season.

Coach Kadiri Ikhana (MON), no doubt, banks on the pace and aggression of the bald-headed forward against Heartland's back four led by captain, Chinedu Efugh, who would miss the support of the duo of Chibuzor Okonkwo and Gege Soriola, who are currently in the Super Eagles' camp on national duty.

Heartland's Bello Musa Kofarmata, Ikechukwu Ibenegbu and Julius Ubido, must cease the midfield from Kwara United's duo of Isiaka Olawale and Yusuf 'Olopa' Jaiyeola to ensure that Sanusi does not get a through pass to rattle either Austin Brown or Akpan Bassey in goal for Heartland.

One player, who could prove useful to Heartland in tomorrow's game, is Ndubuisi Nkoro. The diminutive dashing winger understands Ikhana's pattern of play having played under the veteran tactician at Sunshine Stars of Akure and Kwara United.

Meanwhile, General Manager of Heartland, Sir Fan Ndubuoke, has tasked the players to shape up or ship out. The former board member of the Nigeria Football Association (NFA) is angry that the team's performance in the league so far does not reflect the quality of players in the squad and has threatened to show the players with low productivity the exit.