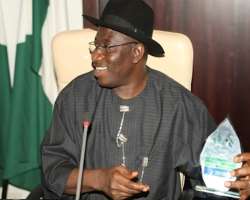 The budget was based on a oil benchmark of $75 a barrel.

"I have just signed the 2011 appropriation bill and the sovereign wealth investment fund into law," Jonathan told reporters inside the presidential villa, Abuja.

The sovereign wealth fund bill is meant to replace Nigeria's Excess Crude Account (ECA), where it saves excess revenue from the sale of crude above its set benchmark in the budget.

There have been debates on how funds in the ECA are shared amongst the three tiers of government —Federal, States and Local Governments, as there are no clear laws governing how the revenue is shared. The ECA was created in 2003 by former President Olusegun Obasanjo.

The Sovereign Wealth Fund was set up to accomplish three main objectives -- saving money for future generations, provide financing for badly-needed infrastructure, and providie a stabilisation fund to defend the economy against commodity price shocks.