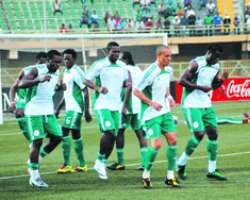 Super Eagles' Chief Coach, Samson Siasia, will appear before the Technical Committee of the Nigeria Football Federation (NFF) tomorrow to defend the list of the players he invited for the FIFA International friendly tie against Argentina and the Nations Cup qualifier against the Antelopes of Ethiopia.

Disclosing this while speaking with the media, the chairman of the technical committee, Barr. Chris Green, said that they would also review the technical report of the elimination of the Super Falcons from the All Africa Games, adding that they would take decision on the future of the team's Chief Coach, Uche Eucharia.

There has been insinuation that the Nigerian female former international, who is to lead the team to Germany for the FIFA Women World Cup may be shown the exit.

However, while reacting to the rumoured sack, Barr. Green, maintained that they would give adequate consideration to the technical report and or probably give her fair hearing before deciding whether she would remain or go.

He further disclosed that SiaOne would also appear before the committee to defend his list for the match against Argentina and Ethiopia, adding that they would also address the media after the deliberation with the two coaches.

'I cannot categorically say if we will sack or retain the Falcons' chief coach until the technical committee meet tomorrow. We will review the technical report of the team's outings in Abuja and Ghana before taking the final decision on her future.

'Siasia will also appear before us to defend his list for the matches against Argentina and Ethiopia. We will, therefore, address the media after meeting with the two coaches and deliberating on other technical matters concerning Nigerian football, Barr. Green said.