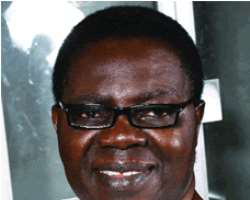 • Ebenezer Obey
It was a day of glory, entertainment and awesome praise/worship at the recent bishopric consecration and investiture of Apostle Isaac Idahosa, as the Presiding Bishop of God First Ministries International.

The memorable event, which held inside the auditorium of the Lekki Light Centre (LLC), branch of the Pentecostal Church, also witnessed plenty of music, musicians, drama and other forms of gospel entertainment.

With over 60 Bishops, leading traditional rulers and top dignitaries from the public and private sectors in attendance, the consecration, which was performed by Bishop John Osa-Oni and moderated by Bishop Leonard Kawas, began on a glorious note.

Mid-way into the gathering, which equally had several Nollywood stars and celebrities on board, sensational gospel group, Midnite Crew, mounted the well decorated stage and got the entire congregation singing and dancing. They eventually left amid applause after igniting the capacity filled hall with their spirit-filled lyrical prowess.

Living gospel legend, Ebenezer Obey alongside his full band, further electrified the hall with his turbo-charged performance, immediately after the consecration. Prior to the legend's exhilarating performance, the LLC Mass Choir, alongside its drama team, had already thrilled the congregation with the best of religious entertainment.

Visibly elated Idahosa, who also dropped his third gospel album at the event, said he was humbled and honoured by his new appointment as a Bishop. He promised to continue transporting lights and transforming lives in the Lord's vineyard.

The entertainment-loving man of God further maintained that he would continue to use the channels of entertainment to spread the gospel, especially among the youths, adding that with God, every day is a plus for his children.

In his remarks, top socialite and the Olumegbon of Ajah, Fatai Olumegbon, who described Idahosa as 'true and visionary man of God,' thanked him for the good works he had been doing with his congregation in Ajah and its environs. He pledged to continue assisting and supporting the fast spreading church with branches all over Nigeria.