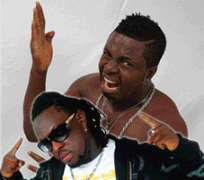 Can you remember Nico Gravity? he sang “I wan Finish Timaya”, it's depressing to let know you that he has been experiencing tough times months back as he scot with a friend in a one room apartment.

Our source came across the one hit artiste around Olodi Apapa, Lagos, with the looks of things he was looking so retched compare to last year when he released his debut track “I wan Finish Timaya”

Close source also revealed that Nico Gravity was spending money as he likes, buying all what his eye flashes until he had misunderstanding with his record label after he released his album, couples to this he has been a very first-class patron to nite clubs and hotel before everything changed for him.

Surprisingly, nearly all his friend has been avoiding him as they accused him of arrogance and selfish thoughts when the money was at its making.