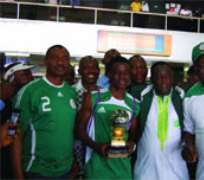 Coach John Obuh would have blamed himself had he not introduced striker Terry Envoh in last Sunday's explosive final match between Nigeria and Cameroon at the recent Africa Youth Championship (AYC) in South Africa.

The Flying Eagles' coach had relied heavily on the Sharks of Port Harcourt skilful and fast attacker for goals during the 2009 FIFA Under-17 World Cup hosted by Nigeria, which the Golden Eaglets finished as runner up after losing to Switzerland in the final.

Obuh had to turn to the dribbling wizard for injured Abdul Ajagun minutes before regulation time after the Junior Lions of Cameroon's dramatic comeback in a match the Flying Eagles squandered two goals lead. The substitution paid off in the early minutes of the first half of the extra time, when the graduate of Kwara Football Academy outpaced and rounded the Cameroonian defenders and fired home the winning goal.

Envoh told Saturday Sunsports that he knew he was going to score the winner and so, made his conviction known to his teammates on the bench before going into the pitch.

On how he was able to deal with the strong Cameroonian defenders before scoring the goal, the former Mighty Jet forward replied thus:

'I expected a tackle from the Cameroonian defenders, but I had made up my mind not to go down except the tackle was so hard that I could not withstand it. The referee had denied us several penalty appeals, so I was determined to keep the ball until I had scored.

'Our coach always tells us to concentrate on our game and forget about the referees. He said that God would always reward our hard work with victory and punish the referees for their bad officiating.'

Envoh expressed confidence that he would make the Flying Eagles' squad to the forthcoming FIFA Under-20 World Cup in Colombia even if the team would be overhauled before the championship.

'Nigeria is a country of over 150 million people and has abundant talents in the game of football. It is not all of us that were in the Under-17 squad in 2009 that are in the current Flying Eagles. Some were dropped due to indiscipline. But it was discipline and determination that saw me through. I believe I will make the squad to Colombia.'

The Flying Eagles' prolific forward dismissed any threat from European and South American teams at the World Cup, while expressing confidence that he and his teammates could replicate their AYC form on the global stage.

'The Europeans and South Americans do not have two heads. We want to repeat what the Ghanaian team did at the World Cup in the last edition of the competition. By the grace of God, we can win the World Cup,' he predicted.