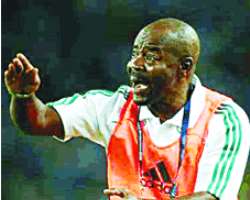 Obuh
Nigeria's Under-20 national team will be aiming for a sixth Orange African Youth Championship (AYC) title when it faces Cameroon in the final today.

Coach John Obuh and his men are wary of the threat the Young Lions of Cameroon are capable of posing in their bid for a sixth continental crown, after losing 1-0 in their first meeting in the preliminary stage.

“Now that we are in the final, we know how important this is for the team to win because some of the players have played in the final of a major tournament before where we lost. We are meeting Cameroon for the second time and we know what to expect,” said Obuh. The Flying Eagles have been continental youth champions on five previous occasions – in 1983, 1985, 1987, 1989 and 2005.

Apart from the ambition of winning a sixth title, Uche Nwofor of Enugu Rangers will want to end up as the tournament's top scorer by adding to his three-goal tally to edge South Africa's Lucky Nguzana, also on three goals. But first, the Nigerians will have to battle against Cameroon's Emmanuel Mbongo, Yann Songo'o, Eric Nyatchou Ndema and Franck Ohandza, who scored the winner in the first meeting on SuperSport. Mali and Egypt will battle for third place, with that match broadcast live on SuperSport 9 from 10:50am Nigeria time.

However, President of the Nigeria Football Federation (NFF), Aminu Maigari, has said Nigeria would reclaim the AYC for West Africa after defending champions Ghana made an early exit from the tournament in South Africa.

Nigeria's Flying Eagles defeated the Junior Eagles of Mali 2-0 at Dobsonville Stadium in Soweto in the first semi-final of the AYC and now play the final today at the same venue. The Flying Eagles have already booked a place in the 2011 FIFA Under-20 World Cup finals slated for Colombia later in the year and have been drawn in Group B against Croatia, Saudi Arabia and Guatemala.

Speaking after goals by Uche Nwofor and Stanley Okoro sent Nigeria into the championship match, Maigari said the Flying Eagles were not only capable of taking the place of Ghana as African champions, but would also replace the Black Satellites as champions of the world. 'We have a team that has ambition and continues to improve with every game. I am happy that we have qualified for the final, but the ultimate is the trophy,' the NFF boss said.

'You know, the Ghanaians were the champions of Africa, and they are our brothers. So, we have to do well to keep the trophy in West Africa,' said Maigari.

'So, you can see that it is time for Nigeria to win the Under-20 World Cup. And though I would not say the draw was easy for us, we would strive to prepare the team very well for the challenge of the World Cup in Colombia.'

Nigeria will play her opening match of the FIFA World Cup against Guatemala on July 31 in Armenia, and will take on Croatia at the same venue on August 3 before moving to Pereira to tackle Saudi Arabia three days later.