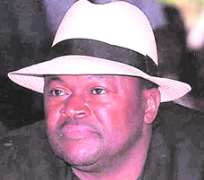 Adenuga
The President General of Nigeria Football Supporters Club, Dr Rafiu Ladipo, has been firing salvos at mischief-makers, who insinuate that Dr Mike Adenuga Jnr has been exploiting his friendship with President Goodluck Jonathan to fend off the interest of other top bidders from the title-sponsorship of the Nigerian Premier League.

Speaking to a crew of Sunday Sunsports reporters before he jetted out to South Africa on Thursday to support the country's Under-20 team currently campaigning in the ongoing 17th Africa Youth Championship (AYC), Ladipo said it was unfair to so label the Globacom boss in such uncomplimentary terms as his decision to sponsor the league came much earlier before he even met Jonathan.

'It is absolutely wrong to say that Dr Adenuga is using his friendship with the President to stop other bidders from putting their money in the Nigerian League,' Ladipo argued heatedly. 'I am not aware that Adenuga can stoop so low to that extent. In any case, his decision to sponsor the league came long before Jonathan became President,' he said.

A major crisis had rocked the country's football last year when rival telecommunications giants, MTN had been unveiled as the league sponsor following an alleged parting of ways with former holders, Globacom on grounds of irreconcilable differences. But matters got to a head when Globacom fought back gamely, accusing the NPL of using Total Promotions Ltd, a marketing and consultancy outfit as third party in brokering the ill-fated deal.

The resultant turmoil thus forced many stakeholders into seeking ways of resolving the matter following a gamut of court cases, which later ensued. But Ladipo took time to explain to Sunday Sunsports thus:

'The league board had no sponsorship for the Premiership. Globacom came into it and the very first amount of money paid for the league was over N600million. At the time, it was quite novel, something never witnessed in the league before. 'Globacom again went ahead to increase the sum by 10 per cent the following year, putting down over N700million. By 2008, the sum had risen to just over N800million. By 2009, Globacom had committed itself to almost a billion naira, about 900million to be precise. But a disagreement arose between both parties, that is, the Nigerian Premier League and title sponsor, Globacom, especially about the issue of mileage.

The telecommunications outfit felt it wasn't getting enough value for its money in the area of the marketing of its products as stipulated in the contract between both parties. Globacom, therefore, decided not to release any more money until the issue was addressed. This would adversely, in turn, affect the programmes of the NPL as it tried to prosecute the league.

'Both parties were unwilling to shift ground and the league became worst for it. In fact, it was almost grounded. Well, the NPL went to court to force Globacom to honour its obligations. It won the case and Globacom was asked to pay what it owed the NPL. The judgment didn't go down well with Globacom, so the outfit challenged it in the Appeal Court. 'Being a stakeholder, I felt it incumbent on me to intervene to save the Nigerian League of the needless bickering. I was worried that the muscle flexing between the two bodies, if carried too far, would eventually ruin the very interest they swore to uphold and protect. I saw it as an ill wind that would blow nobody any good.

'This instigated a series of peace moves that eventually saw both parties meeting to resolve the matter amicably. After series of meetings, which involved top shots of Globacom, NFF, NPL, Equitorial Trust Bank (ETB), the official bankers of the NPL and the Supporters Club, Globacom finally agreed to pay NPL N350million out of the over N900million it originally should have paid before the unfortunate breakdown of their working relationship.

'It was a concession, of course, by Globacom. But it was still considered a far cry from N900million. NPL officials were not happy because they had already been indebted to ETB to the tune of N228million. They had borrowed the money to run the league during the period Globacom went AWOL.

'The NPL felt the arrangement was unacceptable as it feared ETB could be tempted to deduct the sum from source once the cheque is paid in. Officials of the NPL made it clear there wasn't enough from the N350million to pay off the debt and, therefore, appealed to Globacom to grant a debt waiver or a complete write-off. ETB explained its constraints about debt write-offs as stipulated in the CBN guidelines. It explained that there was a certain limit to which it must not exceed.

'Now, finding no way out of the logjam, the matter was taken to Dr Mike Adenuga Jnr, Chairman of Globacom, who after due considerations, ordered the ETB people to do something about the NPL's request.'ETB, like I explained, was constrained by the Central Bank's stringent regulations and so, could only write off N60million, leaving a balance of N68million.