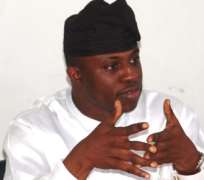 ABEOKUTA, April 11, (THEWILL) – The defeat of Senator Iyabo Obasanjo-Bello and Speaker, House of Representatives, Hon Dimeji Bankole, both seeking reelection to the National Assembly under the platform of the Peoples Democratic Party (PDP) by the opposition party, the Action Congress of Nigeria (ACN) have continued to generate reactions in the state.

Both lost their respective bids to return to the House of Representative and the Senate respectively in the just concluded National Assembly election held in Abeokuta, Ogun State capital on Saturday. Bankole who represents Abeokuta South Federal Constituency, lost to the Action Congress of Nigeria (ACN) candidate, Mr. Segun Williams while Obasanjo-Bello was defeated by Mr. Gbenga Obadara also of ACN.

Obadare in his reaction dedicated his victory to God and the people of his senatorial district, saying, “I give glory to God and I want to express my profound appreciation to the good people of Ogun Central Senatorial District who has graciously given me their mandate to represent them at the Senate.

“The people have spoken, and as the saying goes, the voice of the people is the voice of God,’’ the apparently elated Obadara told newsmen in Abeokuta”, promising not to disappoint his people, he assured them of good representation and delivery of democracy dividends.

Mr. Ijaduoye Monday, who also contested the senatorial election under the platform of the Peoples Party of Nigeria (PPN), polled 27,182 while former Deputy Governor of the state, Alhaji Adegbenga Kaka of the ACN emerged winner from Ogun East Senatorial District.

Sen. Ibikunle Amosun, the ACN governorship candidate in the state, also commended the people of Ogun for their support so far, urging them to do same during subsequent elections.

In his reaction, Bankole described the outcome of the election as the whole reflection of the wishes of the people ‘in our national quest to enshrine an enduring democracy for our nation.’

According to him, “their action after the initial hiccups exercise demonstrates an abiding faith in democracy as an acceptable and veritable path for the development of our nation.’ He congratulated all the winners in the parliamentary election for their victory noting that losers should take their losses in good faith as in any such exercise there must be winners and losers.

He added that “for me the race was not a life and death duel. Of more importance is building, maintaining and developing our democratic institution and processes as a means towards true national development and greatness.”

Also, leader of the ACN in the state and former Governor Olusegun Osoba commended the conduct of the election and declared that former President Olusegun Obasanjo has been exposed for the frauds that were perpetrated in 2003 and 2007 polls.

Using figures to point out the fraud in Obasanjo’s election in 2003, Osoba said while 136,939 persons were said to have registered in Abeokuta North, PDP claimed to have scored 136,700, the total number of registered voters from the area for the 2011 polls was only 124,165 prospective voters.

Quoting figures from Odeda which implied same, Osoba wondered whether the number of prospective voters in the state was increasing or decreasing adding that but for the Modified Open Ballot System which was used, the PDP would have again been able to rig the elections.

According to him, “I thank God that I am alive to see the restoration of democracy, I pray that he [Obasanjo] lives long to see the restoration of all those things that he has bastardized. The verdict is that of the people of Nigeria. The Glory is to God and gratitude of ACN is to the ordinary Nigerians who came out in large number and conducted themselves in a good manner.”

He commended the entire police force in the state saying that they performed brilliantly and responded instantly to the flash points when there were attempts to snatch ballot boxes, saying that the performance of the Commissioner of Police; Mr. Yinka Balogun was an indication that the posting of an indigene would ensure fairness and non partisanship.

He therefore recommended the reduction of voters in each unit to about 300 by creating new polling units explaining that in some cases there were over 1000 persons in a unit making accreditation and voting very slow in some places.