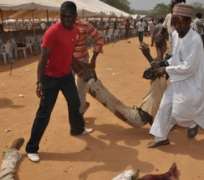 Huhuonline.com can disclose that an explosion rocked the INEC office in Suleja, Niger state, killing at least nine people and injuring twenty eight others. Our checks reveals that majority of those killed were youth corp members, who were at the INEC office to the check the notice board, to ascertain where they were  posted for tomorrows National Assembly election in the state.

In the word of INEC official, who elected anonymity, 'this is deliberate attempt by some disgruntled persons to disrupt elections in the state'.

Why would some target youth corp members? He asked

However, Niger state government has enjoined the people of the state to go about their normal business, and turn out for the polls tomorrow.

Huhuonline.com gathered that hours preceding the Suleja bombing, a man suspected of building bombs to disrupt elections on Saturday was killed in Kaduna, when one of the devices exploded prematurely.

Nigerian Police told huhuonline.com that they had made 12 arrests after the explosion.

'We think they were planning something to disrupt the elections," said a senior police source who elected anonymity".

"We are still investigating'. He affirmed.