INTRIGUES, AS HEAVYWEIGHTS LINE UP IN BENUE 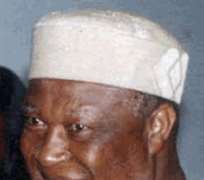 From ROSE EJEMBI, Makurdi
Friday, April 08, 2011
• Gemade
Since democratic rule began in 1999, Benue as a state has always pitched its tent with the ruling party which boasts of producing over 90% of the National Assembly members from the state every election year.

In Benue State, even though there are over 10 political parties that have fielded candidates for the various elective positions, the battle for the soul of the different federal constituencies would be between the ruling Peoples Democratic Party (PDP) and the Action Congress of Nigeria (ACN).

Former National Chairman of the PDP, Chief Barnabas Gemade and Senator Joseph Akaagerger of the ACN are the two political bigwigs that would be locking horns this Saturday in Benue North East Senatorial district (Zone A).

In Benue North West (Zone B), the former governor of the state, Senator George Akume (ACN) would be slugging it out with ex-Speaker pro-tempore, Hon. Terngu Tsegba (PDP), while the Senate President, David Mark (PDP) would be contesting against Gen. Lawrence Onoja rtd(ACN) in Benue South.

These two candidates are from the same Local Government Area -Konshisha LGA and the same District, Gaav. But while Akagerger who is former military governor of Katsina State is from Mbavaa ward, Gemade is from Iwarev. Akaagerger like many other contestants left the PDP after he lost at the PDP primaries and joined the ACN to regain his mandate to represent his people for another four years at the senate.

However, political analysts are of the opinion that Akaagerger should leave the stage for Gemade, having enjoyed that position for four years since 2007, especially as Gemade contested for the same position against him on the platform of the PDP and never left the party even after he lost.

Also, at a recent media chat with the governor of the state, Hon. Gabriel Suswam, he described Akaagerger as a political paper weight insisting that he cannot win in Saturday's polls.

Though  Akaagerger has  no doubt touched the lives of the electorate since he became saddled with that position, the same thing is applicable to   Gemade, when he was the first indigenous Managing Director of Benue Cement Company , Secretary of Works as well as the Chairman of  PDP But this time around, the fear is that the PDPmay fast be losing the fight in the Benue North West senatorial district commonly known as Zone B which was once  widely acclaimed  to be the strong hold of the party since the inception of the party in 1998.

Daily Sun investigation revealed that the Zone B  senatorial contest is certainly going to be a tough one for the PDP especially with the decamping of the former Governor, Senator George Akume from PDP to ACN shortly after the primaries. Akume had boycotted the PDP primaries on the grounds of irregularities and strengthened the ACN in the state. Akume's opponent, Hon. Terngu Tsegba, is the incumbent member representing Gboko/Tarka Federal Constituency.

Even though Terngu Tsegba is running for the election and is perceived to have the backing of the incumbent governor, political watchers are of the opinion that he cannot unseat the present occupant (Akume) who is regarded as a political colossus in Benue politics, having presided over the affairs of the state for eight years before handing over to Suswam. According to this school of thought, some of the things that would count for Senator Akume include his benevolence and his solid political structures as the immediate past governor of the state.

In addition, some people contend that Akume was the brain behind Tsegba's re-election to the lower chamber of the National Assembly in 2007 and so may win the sympathy of the people on that account.

On the other hand, another group of political analysts who do not share in the aforementioned opinion maintain that Tsegba may win the seat with the full backing of the government in power.

Some of the odds against Akume according to opposition are the fact that he is believed to be the architect of one term in office for the National Assembly position, recalling that he used the state machinery to truncate the return of Senator JKN Waku and Senator Saror to the Senate in 2003.

He is also perceived as the one who is bringing Professor Steven Ugba of ACN to contest the governorship election against the incumbent governor who is seeking a second term in office.

Also recently, the Tiv Traditional Council at its meeting declared that Senator George Akume will no longer win any elections in Tivland on the grounds that the former governor incurred the wrath of the Tiv deity, Swem Totem when he forced his way into the palace while the Tor Tiv was away.

'Akume , as far as we the Tiv people are concerned , if he wants , let him stand for election in another land , but we in Tiv here,   will you elect such a person?,' the Tor Tiv asked recalling that the same pronouncement was made on Wantaregh Paul Unongo when he disrespected the Tor Tiv institution many years ago and had not been able to win any elections as a result of that pronouncement, vowing that Akume will suffer the same fate.