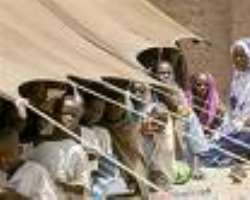 Several African refugees at the Oru Camp in South West Nigeria have chided the United Nations High Commission For Refugees (UNHCR) for not taking adequate care of their welfare and abandoning them to their fate in their hours of needs.

They stressed that the annual celebration of the World Refugees Day (20 June) has become "a mere jamboree'', meant to enrich few officials at the detriment of the refugees.

“Every year, UNHCR deploys a lot of human and material resources on the celebration without paying adequate attention to the welfare of the refugees.

"Look at the camp, no water, electricity, food and medicine. People are going through great difficulties and the UN agency would have spend several millions of dollars marking the day,” Dawoh Hassan, a Sierra Leonean refugee who arrived Nigeria 12 years ago told PANA at the camp located some 140 km from the commercial city of Lagos.

Hassan said the human and material resources deployed by the UN refugee agency and various countries be channeled at improving refugees' welfare and to conflict prone areas to prevent crisis that could snowball into wars.

Hassan identified struggle for political power and control over resources as some of the factors that lead to wars.

The 20 June of each year is set aside as World Refugees' Day, as a way of bringing to the front burner, the plight of refugees all over the world and develop strategies of improving their welfare.

The United Nations High Commission for Refugees (UNHCR) is the anchor organisation that supervises the celebration, with other countries also observing the day by organising different events.

However, the African refugees insist the objective of the event has been defeated.

The UNHCR and the Nigerian National Commission For Refugees (NCFR) insisted they have officially closed the Nigerian camp since December 2006, implying that all forms of assistance to the refugees will be withdrawn.

The refugees were given three options - repatriation, re-integration or resettlement to a third country.

However, while some have left for home through the repatriation programme, those who chose re-integration are equally complaining of difficulties, while those that applied to be considered for resettlement have not been granted such request.

“It is all gimmick, you are in the camp now, from your own observation, is the camp really closed. We still have about 3,000 refugees from Liberian, Sierra Leone, Democratic Republic of Congo (DRC), Sudan, Cote'd Ivoire and some other African countries,” said 30-year-old widow and mother of three, Fatimata Conte.

“If you say you are celebrating World Refugees' Day and the real people are here in the camp without food, medicines, clothes and no sense of belonging, then what are you celebrating?" another refugee who called herself Mama Caro asked the PANA correspondent.

”They are there in the cities having a good time while the bulk of the refugees are here in the cold, suffering. The UNHCR said they have closed the camp, yet they came and gave money to few people for their transport to Abuja for today's celebration. Look at me and my four children, it has not been easy taking care of them,” Mama Caro lamented.

In the past, the 19-year-old camp, which has been home to the refugees was a bee hive of activities and festivities, particularly on a day such as the World Refugees' Day.

Apart from the usual speech from the UN refugee agency officials and NCFR, religious and non-governmental organisations such as the African Concern and African Refugee Foundation (AREF) are always at hand to give relief materials to the refugees.

This year, there is nothing like that as the whole camp was quiet, except for the football match organised by the refugees to mark the day and keep themselves happy.

The usual pomp and pageantry, drama sketch, dancing, singing and merry-making were absent.

The camp environment was unkempt with overgrown weeds and the refugees said on daily basis they battle to kill dangerous animals, including snakes.

The only clinic serving the camp has been closed, while the hand-pumped borehole water is not suitable for drinking.

The school has also been closed with all UNHCR and NCFR offices relocated to Ijebu-Ode, some 15 minutes drive from the camp.

Many of the refugees are blaming both NCFR and UNHCR for their predicaments.

“The Nigerian public has been misinformed that the camp has been closed, based on that information, many philanthropic organisations that usually come with relieve materials on World Refugees' Days and even once in a while are not doing so again.

"The Nigerian people have been wonderful in terms of extending assistance to us, ” another refugee who did not disclose his identity said.

“As regards drugs, when the situation becames so critical, we have to consult the African Concern (an international NGO which caters for the less privileged).

"The organisation graciously provide us with many drugs to operate a small clinic here. It is being managed by some of the health workers among us,” said Hassan who was a past chairman of the Sierra Leonean Refugee Welfare Council at the camp.

“Refugees are not asking for much, all they need is a form of assistance that can make them useful. Here at the camp, we have a lot of trained professionals. Many of us, through individual efforts, have developed ourselves by returning to school.

"Setting up a business is difficult because of lack of capital. I am appealing for assistance from the international community in terms of food, medicine, clothes and other relieve materials,” Hassan said.

The refugees appealed to the Nigerian government and the UN agency to rethink their positions, stressing that even though some of them would have loved to go home, due to some political and security reasons, they cannot go.

“In my own case, I cannot go on repatriation or re-integrate with the local community. What I want is a resettlement to a third country. This is because there is no one to return to at home. I lost all my parents during the war and I was hit with riffles several times on my head by rebels which have led to a head injury, ” said Mamie Massaquole who has been in the camp for nine years.

Massaquole stressed "I am at the moment taking drugs at the Neuro-Psychiatric Hospital, Aro in Abeokuta. I have made several representation to the Nigerian government and the UNHCR, I hope my case will be looked into so that I can go abroad to receive proper treatment”.