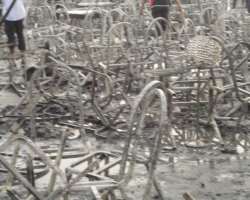 It was a confusion on Sunday night as panic-striken top celebrities and other VIPs scampered for safety when the Balmoral, an upscale event centre in Oregun, Lagos went up in flames.

The raging inferno, which started an hour into the 14th edition of the City People Awards which was going on at the venue, completely razed down the facility.

Hordes of politicians, captains of industry, musicians, actors, actresses, socialites and journalists trampled and climbed over one another in the rush to get out of the polyethylene canvas-made marquee to save their dear lives.

Ezekiel Adamu, CEO, The Balmoral, and son of former FIFA executive committee member, Amos Adamu, told Showbiz Trends that the fire started from the make shift kitchen inside the marquee. “The fire started when one of the guests, not satisfied with the caterers' service, went to the cooks' stand to pick her food. Unfortunately, the woman wore a robe (perhaps a combustible material) which caught fire from the burners. Out of panic, she flung the burning robe up and its flame ignited the hung decorations and immediately the fire spread,” Adamu said.

Out of panic, both the guests and The Balmoral staff ignored the numerous fire extinguishers placed at strategic locations inside the marquee, and fled. Adamu said what was paramount on his mind was how to evacuate the over 1,500 guests inside the facility. The centre, believed to be owned by the former FIFA top shot, Adamu, was completely gutted.

“It is so unfortunate that this thing happened, but there is no problem. My joy is that there was no casualty as all the guests were evacuated. Apart from the people inside, our major concern was the NNPC filling station beside us,” said the younger Adamu.

The place has already been assessed by the insurance company and according to Adamu, it will be rebuilt in the next 15 days with the assistance of their bankers and the insurers.

A source told Showbiz Trends that ageless Abah Folawiyo was trampled upon as she fell and crawled on her knees to escape the raging fire, while Nnaji removed her heels and battled with other notable celebrities to struggle out of the large tent.

Apart from the owners of The Balmoral who suffered a huge loss (the place was only re-opened last December) after it was rebuilt-one company that is feeling the brunt of the loss is Royal CitiBeat Electronics.

Showbiz Trends learnt the company who supplied the lighting and sounds equipment to be used at the awards show, lost more than N25million worth of equipment. According to a staff of the company “It was a great loss as I'm not sure whether my boss insured those equipment,” the staff said dejectedly.

Meanwhile, the management of City People has fixed Sunday 1 May for a fresh award night.