JONATHAN WOOS BABANGIDA, IN BID TO WIN IN THE NORTH 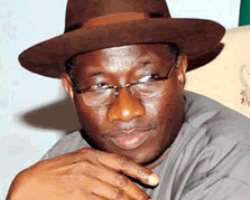 Barely four weeks to the general elections, President Goodluck Jonathan has taken measures to win over influential political leaders in the North, with the view to garnering support in the zone. Sources revealed that jolted by the massive turnout in campaign rallies of former head of state and Congress for Progressive Change (CPC) presidential candidate, General Muhammadu Buhari, in the North, the Jonathan camp has intensified efforts to get the support of influential northerners, who are expected to help it win over voters from the zone.

Saturday Sun gathered that one of the northern leaders the Jonathan camp has made efforts to win over is ex-military president, General Ibrahim Babangida, who worked against him before the presidential primary election of the Peoples Democratic Party (PDP).

Checks revealed that Jonathan reckons that an open endorsement or secret support from Babangida would sway voters in the zone for him. In this regard, the president has made contacts with the retired soldiers and asked for support.

In making the move, sources said, Jonathan was buoyed by Babangida's show of sportsmanship when he congratulated him after he emerged winner of the PDP presidential ticket. The president's camp believes that if Babangida could acknowledge Jonathan's victory at the PDP primary election, he could as well support him for the election proper.

The president, sources revealed, acknowledged Babangida's clout in the North and has therefore, concluded that he would be of immense assistance, if he agree to support Jonathan. The Jonathan camp, in analysing the outcome of the PDP presidential primary election, believes that Babangida was instrumental to support ex-vice president, Alhaji Atiku Abubakar, got from delegates from Zamfara, Niger, Kano, Sokoto and Kebbi states, at the PDP primaries. With such clout, the Jonathan camp believes that Babangida has the capacity to talk to northerners to support the president and they would oblige.

The president, it was learnt, needs Babangida's support because it believes that only him would whittle Buhari's following in the North East and North West and by so doing giving the president easily victory in next month's election.

Saturday Sun learnt that to get Babangida's confidence, Jonathan has, in their various discussions, reiterated his desire to bow out of office in 2015, after serving four years. However, the issue that seems to delay Babangida's decision on the president's request is the non-commitment for the North to produce the president in 2015.

Source said that although Babangida is favourably disposed to supporting Jonathan, in the interest of peace an stability, the former head of state appears to doubt the president's ability to keep to his promise of not vying for a second term in 2015. It was gathered that Babangida wants a firm commitment from Jonathan that no matter the pressure or temptation, he would not renege on his promise to quit in 2015. Also, the former president's camp wants a commitment from Jonathan that by 2015 a northerner would occupy Aso Rock.

Checks revealed that Jonathan has already made promises on the demands, believing that this would make his victory at the poll easier. Some of his aides, it was gathered, see nothing wrong in power returning to the North in 2015, arguing that northerners were part of the struggle for the president to get PDP ticket.

Sources revealed that as soon as Babangida is sure that Jonathan would not renege on his promises, he would support his candidature. It was, however, gathered that the former president's children prefer Jonathan, as president, to other presidential candidates. Already, Babangiga's son-in, Governor Shinkafi of Zamfara State, is working for Jonathan. By extension, his wife, who's Babangida's daughter, is also in support of the president's candidature. She is said to be impressing it on her brothers and sisters to do same.

Apart from Babangida, sources revealed, Jonathan is also wooing traditional rulers from the North. In any northern state the president goes for campaign, he visits emirs and other community leaders, where he solicits support.

Meanwhile, checks revealed that Jonathan has broken the ranks of northern political leaders, ahead of the general elections. Sources revealed that many top politicians in the North have backed down on their opposition to Jonathan's candidature, believing that the battle is already lost.

A competent source told Saturday Sun that the success Jonathan has made in winning over some northern leaders accounts for the failure in the zone endorsing any of the presidential candidates from the zone (Buhari, Alhaji Ibrahim Shekarau of the All Nigeria Peoples Party and Mallam Nuhu Ribadu of the Action Congress of Nigeria) as consensus northern candidate.

A source close to the Jonathan camp, which confided in Saturday Sun, said that following promises northern leaders made to the president, Buhari's feared stronghold in North West geopolitical zone has been eroded.

'Jonathan now has massive support in North West. The opposition is hoping that it would get block votes in the North and therefore, get an opportunity for run-off presidential election. But I can tell you that there will not be any run-off poll. The president will win in the first ballot. He will get impressive votes from the North East and North West. Already, there is no contention in North Central.'