N'ASSEMBLY BEHIND SPATE OF LITIGATIONS 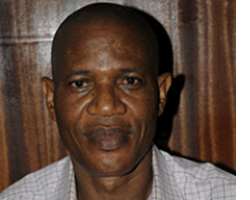 •Oke
In recent times, the nation has been treated to a bewildering spectacle of court orders and counter orders over the list of party candidates a development that has pitched the Independent National Electoral Commission, [INEC] against political parties and aggrieved candidates.

While some said that INEC was only doing its statutory responsibility, there are those who are also of the opinion that INEC seems to have stepped out of line.

National Legal Adviser of the Peoples Democratic Party (PDP), Olusola Oke, the party most hit by the development blames INEC. Oke in this interview with journalists was acerbic as he dismissed INEC as being rascally for trying to impose 'candidates' on parties.

He spoke on this and other sundry issues.
Excerpts:
There was a court order, restraining your party from presenting the Enugu State Governor, Sulivan Chime and his Abia counterpart, Theodore Orji, as its governorship candidates. But at its zonal presidential rally in Enugu, the PDP presented them with flags, in defiance of court orders

Well, let me confess to you that I haven't been part of these campaigns, since the South -west one that I attended and I have lost touch completely with members of the PDP NWC. If you go to our secretariat now you find out that it is desolate.

So, I have not been privileged to actually brief them on the happenings on the various suits in court. For instance, the one that was issued on Thursday even till now I haven't received the enrolment of order from the court.

Normally, but for these campaigns that our people are attending, at NWC meetings I brief members on developments in courts, but I haven't been able to really make contacts. If anything has been done, which I am not personally aware, it must have been done out of the fact that they don't have the correct facts about the developments in court. In other words, our party believes in the rule of law.

We have no reason to disparage or be defiant to any court order, because we believe most of these orders that have been issued, they are temporary measures. On the ultimate, we are very strong on our position that the candidates we have nominated are all validly nominated. We believe that the courts would also see our points of view. So, ordinarily, if anything has been done in that regard it must be done out of the fact that they don't have proper briefing.

But you could have reached your colleagues, members of the PDP NWC through phone calls, just to intimate them on certain developments in courts.

Yes, they can be reached on phone, but I haven't reached them. We have our regular ways of briefings, but we haven't been meeting.

Handing over the flag are ceremonial, they aren't part of the orders of court, they are just internal affairs of the party. The flag of the party doesn't make you a candidate; what makes you a candidate is the nomination which has been completed since the 31st January, 2011. So, we can decide to give you are flag, nobody can restrain us from giving our flag, it isn't government property. There are one million flags there that anybody can take.

But what is the import of court orders, few months to the election?

They constitute a lot of distractions. When the National Assembly was inserting these provisions, I warned them that most of them that would end up being nominated would have double jeopardy. They would go through the hog of primary election litigations to the Supreme Court; they will go through the hog of election petitions litigations to the Court of Appeal. I told them. So, they opened the flood gates.

You know before now primary election disputes aren't justiciable, no court would look at them. But the National Assembly decided to make it justiciable and they are now the casualties. I am not running elections, no member of PDP NWC has contested. So, they are the people that would bear the burden, because whether you like it or not, it is the party duty to nominate and whatever the court decides, definitely becomes.

So, if the court says a nominated candidate, ultimately on the judgment isn't a candidate and after an appeal to Court of Appeal and Supreme Court and the Supreme Court affirms it, that's the end of the matter.

So, if they had listened properly I am sure they wouldn't have inserted that clause, to now in a way circumscribe the discretion of a political party to nominate candidates for election.

The Electoral Act says INEC must accept list of candidates from the party national leadership. But in the case of Anambra, INEC rejected the one from PDP national secretariat and accepted the one from the state chapter of the party.

That was a curious development and to me, I want to say it is an unbridled, a rascally intervention of the INEC in the internal affairs of a political party.

Section 31 of the Electoral Act is very clear , they cannot reject and even if they can reject, they can't choose candidates for political parties, for goodness sake. The party under section 31 has the responsibility to nominate the candidates it wants to sponsor.

It isn't under obligation to nominate in the first place, but once it nominates, the responsibility of INEC is to accept it. And even if there is a court order saying, ''don't receive!'' that's all INEC can do. INEC can't say, ''I am not receiving this; I am picking this candidate for you!''

I think INEC should concern itself with conduct of general election and allow parties to decide their candidates, because there is no basis for the embarrassment the INEC is taking PDP through in Anambra state. It shows that INEC has gone into the arena and now concerns itself with the constitutional responsibility of the parties and it is diverting itself to irrelevant things now. It is very unfortunate.

But like I said, most of these riddles would be resolved by the courts, ultimately.

Handing over the flag are ceremonial, they aren't part of the orders of court, they are just internal affairs of the party. The flag of the party doesn't make you a candidate; what makes you a candidate is the nomination which has been completed since the 31st January, 2011. So, we can decide to give you are flag, nobody can restrain us from giving our flag, it isn't government property. There are one million flags there that anybody can take.