ENUGU AND HER POSTER EXCELLENCIES 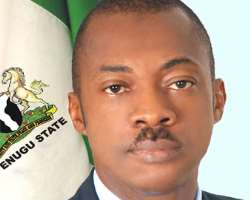 POLITICIANS are men and women of theater, always adept at this game of high cunning, of unending manipulation and often full of intrigues.

Chime
Oftentimes, you wonder if God enlarges the hearts of politicians to be able to accommodate all accolades and iniquities that dot their paths at all times.

In truth, every sane mind gets appalled as to whether those who seek political offices are so blinded by their lust for the power corridors. Well, it could be, as Tacitus says that the 'lust of power is the most flagrant of all passions.'

Otherwise, how does anybody come to terms with the quality and quantity of characters aspiring to any single office in the land at any given election? In a way, the reason for such an unholy scramble is not far-fetched.

Today, all you need to offer yourself for any elective position or announce your intention in our emerging brand of politics is a poster. It is this simple! In Enugu as in other states, just print and paste a handful of posters indicating interest in the governorship of the state and the few sycophants and hangers-on would readily prefix your name with the title 'Your Excellency.'

And wait for it, these pretenders gleefully appropriate this latest title even at public functions. These days, we refer to them in Enugu as Poster Excellencies. It is so with other positions that we now have numerous 'Distinguished Senators', 'Honourables', courtesy of their posters and billboards announcing their aspirations to the Senate, House of Representatives or the State Assembly.

Fact is that there is nothing wrong to flirt with the idea to contest the governorship of your state or any position for that matter. The comedy of the Enugu example was the laughable gambit for party platforms by our brothers who eternally seek to govern us.

The first set of their posters offered no platforms at all. No parties! Were they going to run on non_party basis? Or as independent candidates? Words later filtered that our Poster Excellencies were working on the possibility of a consensus candidate to slug it out with the incumbent governor, Sullivan Iheanacho Chime during the gubernatorial primaries of the Peoples Democratic Party (PDP).

In a jiffy, these men whom the sun would not set on their governorship ambitions, rolled out a second set of posters, all now announcing the PDP as their chosen vehicle. With a new chief priest in charge of Wadata Plaza in Abuja , they found the needed verve to rev the engine of rumours. Nobody bothered any longer whether they satisfied the qualification criteria to contest.

These comic actors in the name of guber aspirants are no gymnasts, but they owed nobody any explanation or apology for their legendary political somersaults. Of course, no discernible mind needed the gift of divination to predict that our Poster Excellencies would soon flee to other less_fancied parties once defeat beckoned, as it surely did from the onset.

And for a third time in weeks, the printers were at work to churn out yet new posters, this time unashamedly and belatedly announcing fresh platforms after Governor Chime effortlessly picked the PDP ticket in a landslide victory.

For some, their posters are bargaining tickets to negotiated settlement and they are currently so disenchanted because Chime prefers the electorate to decide.

Bombs are planted with Sullivan Chime as the prime target but the governor, with divinely-inspired courage and show of leadership, has ignored the threats of the bombs and goes after the ballots.

Today, he concludes his senatorial district rallies in his home Enugu West as he begins the Local Government campaigns in earnest. As the various campaign teams begin the house-to-house campaigns in all the wards, our other Poster Excellencies are busy defacing the walls and buildings of property owners with their posters and billboards.

The latest craze is the deployment of jingles which are bereft of worthy vision and programmes for our people and quite succinctly expose their parochialism.

Only few days ago, Dan Shere whose People for Democratic Change recently changed its slogan because it bore the same message as that of another party, was in Lagos shopping for media interviews. In a matter of hours, journalists will put pen to paper and we will all have the privilege to hear from a man who aspires to the highest office in our beloved Coal City State .

For me, there is nothing to wait for. He has become so predictable that no one deserves a prize for predicting him right. He is certain to attack Governor Chime and idolize his former boss but he will make no comparisons, and for obvious reasons. Light and darkness have no meeting points.

It will be a waste of valuable newspaper space to engage Shere. Governor Chime has continued to run an issue-based campaign, not one of mud-slinging.

It will obliterate the self-worth and dignity of the Chime administration to embark on such a needless altercation with one who has chosen the media newsrooms in far-away Lagos to spread worthless propaganda than mount the podium to convince the voters at home on why he must be entrusted with our future.

It is, therefore, not surprising if he says that there is 'nothing happening in our rural villages.' How do you expect him to know that there is a massive on-going construction of a road that goes from Ugwuogo through Ekwegbe and which terminates in his hometown of Opi, just few metres from his own residence?

Since we are both Nsukka men (Shere and I), it may not be out of place to ask if he knows of the following inter-local government roads at different stages of completion and/or construction now: Nsukka-Ibagwa-Ogrute-Ette road traversing through three Local Government Areas in Nsukka land; Eke-Ebe-Aku-Nkpologu which runs through two different Local Government Areas in our senatorial district and the 9th Mile_Iwollo_Umulokpa which again terminates at Uzo_Uwani Council in Nsukka land.

Why then bother to talk of the 52-kilometre Akpasha-Ozalla-Agbogugu-Ihe-Owelli-Ogugu-Nenwe-Mgbowo-Awgu up to Abia State border where asphalting has been done up to 30 kilometres? Or other numerous rural areas that are on-going in the other two senatorial districts?

We stand to be challenged that there is none out of the 17 Local Government Areas in Enugu State where fresh road construction, rehabilitation or reconstruction work is not going on now or has been awarded.

While the regime has delivered on hundreds of urban roads in the two major cities of Nsukka and Enugu , the aggressive rehabilitation of others has continued unabated. Today, the dualization of Agbani Road , Akwata and Zik Avenue is on_going with a huge proportion of the former already completed. It says a lot about what those in opposition have in stock for our people if they say it to our faces that it is not streetlights and traffic lights that Enugu needs. Wow!

Let me ask them: Does Enugu State need free education from primary to junior secondary which the Chime government offers? Do we need free maternal and child healthcare in our hospitals for pregnant women and children under five years? Do we need to give the rural folks electricity as has been given to many communities in Awgu Council as well as in Nimbo-Opanda-Adani-Ogurugu; Oji-Nachi, Aji and Udi-Ezeagu feeder project?

Only recently, the government sponsored 165 graduates drawn from all the local government areas for training in integrated mechanized agriculture at the Songhai Farms in the Republic of Benin .

They had since returned and four hundred hectares of land are now being prepared in Adarice in Uzo_Uwani Council for the take-off of the Enugu Songhai Initiative.

Rice farmers from Thailand and Vietnam are working at Adani and Amagunze in Nkanu East. Government has also provided tens of deep and shallow boreholes to give water to the rural dwellers.

Yet, somebody who erroneously believes that our people are so gullible not to differentiate reality from fiction, still musters the guts to accuse Governor Chime of not doing anything in the rural communities! The beauty of the situation in Enugu State is that our people who are the beneficiaries of Chime's good governance are so disgusted and impatient with the pretenders who seek their votes by deliberately falsifying facts.

In the next 51 days, the Enugu people and residents will speak with their votes and leave the handful of the vanquished to lick their wounds and thereafter return to the photo studios for pictures that will be used in the 2015 posters.

*Chuks Ugwoke is the Enugu State Commissioner for Information, Culture and Tourism