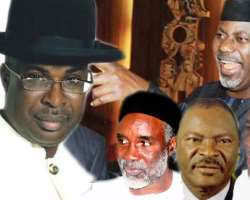 Erstwhile Presidential aide and leading gubernatorial candidate for Labour Party in Bayelsa State, Timi Alaibe, after reviewing the High Court judgment with his close supporters in his country home in Opokoma, Bayelsa State on Wednesday relocated to the federal capital, yesterday morning to strategise over the matter.

Other opposition gubernatorial candidates in the five states similarly affected by the judgment were believed to be converging on the federal capital where they are believed to be piling pressure on the Independent National Electoral Commission, INEC to appeal the judgment.

While a couple of Senators expressed shock at the court judgment, the Deputy President of the Senate, Senator Ike Ekweremadu, told Vanguard that the National Assembly had proactively moved to check the flaw in the constitution by the amendment to Section 180 of the 1999 Constitution to ensure serving Governors who win re_run elections only serve for four years.

Asked how long it would take the commission to react to the development, Mr. Kayode Idowu, Chief Press Secretary to the Chairman of INEC, said: 'As long as it takes to understand the implications and act on it.'

It has also emerged that Governor Emmanuel Uduaghan of Delta State who was swept into office after last January's re-run election has gone to court for an interpretation of his own tenure. However, Uduaghan's participation in the court judgment was being clouded by the fact of his inauguration.

Opposition political parties in Delta were insistent that Governor Uduaghan would not benefit from the judgment despite his fresh inauguration last January. Their claim was, however, dismissed by Chief Paulinus Akpeki the Delta State Commissioner for Orientation and Public Communication.

Akpeki excited
Akpeki said: 'I am very excited, I am happy and I have been vindicated.'

Opposition elements in the State led by Chief Great Ogboru, the Democratic Peoples Party, DPP gubernatorial candidate in the 2007 election and the forthcoming election said the Governor must face a fresh election next May.

'Uduaghan filed his own case for term extension at the Federal High Court, Asaba, on February 14. Yesterday's bad judgment in Abuja doesn't affect him at all as he wasn't a party in that case, he is afraid of elections but the April governorship election must and will hold in Delta,' Chief Great Ogboru, the Democratic Peoples Party, DPP gubernatorial candidate said in a statement yesterday as he advised Deltans to prepare themselves for the election.

Chairman of the Congress for Progressive Change (CPC) in the State, Mr. Edward Ofomona, also addressed party leaders and supporters yesterday assuring them that the party was going ahead with preparations for the April elections.

Ofomona said his party was ready to oust the PDP led government come April, noting that the PDP government had allegedly failed Deltans in delivering the dividends of democracy.

Sen. Bassey Ewa-Henshaw (PDP, Cross River)  told the News Agency of Nigeria (NAN) that he was baffled by the judgment. He said: 'If I remember correctly, the Supreme Court had already taken a decision on the matter that if you were the incumbent and you had to go for a re-run and you win, your tenure continues from where it stopped. This judgment is a bit baffling to me and I need to be able to look at the two judgments to know what the judges used as a foundation to arrive at their decisions.

In his reaction, Sen. Sidi Ali (PDP,FCT), said that although the judiciary had the power to interprete the law, it also had the duty to put things straight. 'It is the duty of the judiciary to put things straight. The judiciary must have seen a conflicting issue with the constitution, perhaps some loopholes here and there, before coming out with such a judgment.' He said that the judgment would impact negatively on the arrangements being made for the forthcoming elections in the affected states.

Speaking in the same vein, Sen. Olorunimbe Mamora (ACN,Lagos) and Deputy Minority Leader of the Senate, said that the judgment did not take into cognisance the provisions of the Electoral Act as amended.

He said: 'The pronouncement must have been in line with the provisions of the previous Electoral Act and not in the  context of the New Electoral Act passed by the National Assembly. It seems to me that we are in for a rough time.

Conflicting judgments is not good for our democracy. Conflicting court pronouncements creates crisis and instability in the system and we are constrained by time. We must begin to get serious in all that we do.'

The people of Sokoto state are not happy. We have held meeting and we are going to challenge the judgment at the Appeal Court. There is no reason that the Court could not stand by the Constitution as amended.'

Also lamenting, Chairman of the Action Congress of Nigeria, ACN, Alhaji Ibrahim Milgoma said: 'This judgment is not in the best interest of the generality of the people of Sokoto State. Of course, we cannot fold our arms and see justice being perverted by the same institution that is supposed to uphold it. Just  wait and see what we will do.'

The judgment was, however, welcomed by the Attorney-general and Commissioner for Justice in Sokoto State, Alhaji Inuwa Abdulkadir saying that the people of Sokoto state are happy with what the Court has done, adding that the law has been defended.  'The law cannot be enacted today and you expect it to be back-dated. The law is not and can never be retrogressive. It must be proactive and this is what the court has confirmed,' Abdulkadir said.

The CPC gubernatorial candidate believed that the appeal is the right thing to do as he is in the race to unseat the Murtala Nyako led PDP government. 'Looking at the issue of stepping down the election this year, one will wonder that the 8 months served by the Governor is a bonus. Then what about all the huge expenditures and agreements reached during the period? Are the agreements not binding on the state? What about the laws enacted which he (the Governor) signed and are in force? he queried.

Buhari reacts
Mr. Yinka Odumakin, spokesman to the Presidential candidate of the Congress for Progressive Change, Alhaji Muhammadu Buhari called on the apex court to deliver a higher judgment to lay to rest the issue of tenure elongation.

He told Vanguard on telephone: 'I see that there are two conflicting judgments regarding the tenure of the affected governors. In the first place, there was an earlier judgment after the Ekiti State governorship rerun during Segun Oni's time. The judgment stated when his tenure would end. As far as we are concerned, there should be a higher judgment to restore sanctity to Appeal Court and the judiciary as a whole.'

When contacted by Vanguard to get his party's position, National Publicity of the Action Congress of Nigeria, ACN, Alhaji Lai Mohammed said 'we are still studying the judgment after which we will make known our position.'

Legal opinions were divided on whether the Federal High Court Abuja judgment which extended the tenure of five governors beyond 2011 applies to Delta State Governor Dr. Emmanuel Uduaghan who was sworn-in afresh January 10 following his victory at a re-run poll which held January 6.

Curiously, Uduaghan was sworn-in same day President Goodluck Jonathan assented to the amended 1999 constitution. Section 18 (c) of the amended constitution  reads:  'In the determination of the four year term, where a rerun election has taken place and the person earlier sworn-in wins the re-run election, the time spent in office before the date the election was annulled shall be taken into account.'

Another Lagos lawyer Mr. Bamidele Aturu argued that Uduaghan could not benefit from the judgement since he took his oath of office the same day the president signed the amended  constitution.

Ozekhome on Uduaghan
Ozekhome said: 'Although the judgement affects five governors without Uduaghan being mentioned. Constitutionally and legally, the judgement has rubbed on positively on him. Although Uduaghan was not a party to the suit, the ration set down by Justice Adamu Bello applies with as much force to him as it does to the five governors. What a lot of lawyers don't understand is that Justice Adamu Bello was not saying anything new.'

Disagreeing Aturu said: 'Governor Emmanuel Uduaghan of Delta State is not covered by that Abuja Federal High Court decision extending the tenure of five governors. The judgement cannot be retroactive if he was sworn in the same day the amended constitution was signed by the president. Even if he took the oath of office earlier that day before the constitution was signed, it would be difficult to prove the time he was sworn in. So, in law, he is deemed to be preparing to face the electorate in April.