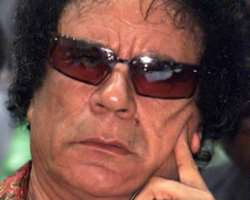 Gadhafi, be careful what you pray for, Nigeria is still intact and you are in shambles. We can understand some Nigerians that still see Gadhafi in rebellious light against colonial and oppressive powers. But if everyone calls you a mad dog and then bark at everyone including using foreign mercenaries to kill your own people, help must come your way. If we take into consideration that the population of Libya is just six million and earns more from oil than Nigeria with a population of 150 million; Gadhafi's praise based on better infrastructure than Nigeria is justified. Gov. Fashola is also praised, despite low world livability ranking of Lagos with 18m people to cater for, compared to Libya's only 6m.

However, Gadhafi is a mad dog looking for ways to destabilize African countries so that he could install his own colonial puppets. He was a strong backer of Charles Taylor but could not offer him asylum he requested, yet Gadhafi had the nerve to criticize Nigeria on betrayal. Taylor not only killed Nigerian soldiers, he undermined Nigeria's peace effort in his Country, Sierra Leone and Central Africa. It was an international agreement that got him asylum in Nigeria that betrayed him; and Gadhafi refused to take him in.

The seed Gadhafi is sowing in Libya right now by using Pan African Legion drawn from neighboring African countries or those trying to cross the desert originally aimed to destabilize African governments, as mercenaries against his own people is appalling because that will create future bitterness between Arabs in or out of Africa with Africans south of Sahara. Those well informed are familiar with ancient history where Arabs got the help of African “sharp shooters” to help them with their wars in the Middle East now Iraq only to pay them back in cruelty that resulted in revolt. The brave Africans ruled in the Middle East until a combination of Arab armies subdued them.

We must also remember that one of the greatest African Empire of Songhai was brought down by the Moroccans invasion. They came for gold but mosquitoes killed most of them and their horses stopping them from direct access to gold. It is why Nkrumah never failed to praise the role of malaria that killed off the Arab invasion in Africa south of Sahara. We need to know some of this history to put the role of Gadhafi into proper perspective. He is not the first Arab that destabilized Africans and others will try.

Nevertheless, the role of Egypt in the accommodation of African leaders and students must not be lost on us. They took in the families of Nkrumah and Lumumba when their own people turned against them. We must be grateful to Egypt because our historical ties from ancient days are worth celebrating. So we have to differentiate Gadhafi's Libya from post Gadhafi's Libya. He wanted to be African not because he loves Africa since he was rejected by fellow Arabs, but because he thought he could use some as his puppets.

Most Africans do not care how or where Gadhafi ended his life as a villain or a martyr. Power gets into the head of a dictator no matter how benevolent they might be after 42 years as the leader of Libya. We had our dictators in Nigeria but none of them lasted that long in office so they try to come back and run for election for the second or third term as Obasanjo to make the record. Babangida and Buhari recently praised the tenure of Abacha and by fiat, claimed that he was not corrupt, regardless of international documented evidence that he was. Dictators-in-common pledged for another dictator.

One of the police Abacha used to chase NADECO that later became the anti-corruption Czar also became a presidential candidate giving clean bill of financial cover to his new sponsor that also has international record as a drug dealer. The point here is, there are strange bed fellows when it comes to politics and if Nigerians do not learn from history, we are bound to make the same mistakes electing someone like Gadhafi or Abacha.

Many of these dictators like Gadhafi, started with some burning issues that are close to the people. The problem is the longer they entrench themselves in power, the easier it is for power to corrupt them. Ghadhafi have spent Libya oil revenue as if it is his personal assert enriching his children and preparing them for power until they got into sibling rivalry. If they have the fear that one day they will hand over and others would have to judge their tenure, they might have ruled differently.

In terms of benevolent dictator, Tito might have been good for Yugoslavia but he had to keep a strong arm to prevent eventual disintegration of the Country. Even closer to us was Nkrumah's Ghana. There were dissenters in Ghana that had nothing good to say about him. Some of them were glad he was overthrown. Indeed, western propaganda had him as corrupt with millions outside the Country, when in fact he was a poor but a well balanced leader who had seen through neo-colonialism before his time.

Nkrumah desire for a united Africa cannot be compared to Gadhafi lip service to Africa. Nkrumah spent Ghana meager earning on freedom fighters in Central and Southern Africa out of the passion that an African must be respected and free to determine his economic independence. Gahadfi was looking for puppets and re- colonization of Africa as an Arab like they did in ancient times.

Therefore, Gadhafi is in a lonely position compared to other dictators in and outside of Africa not because he is a rebel but because he has personal ambition beyond the Arab world. When he gave up his quest for acquisition of nuclear bomb after being promised or duped by different countries, he spilled on them to the established nuclear powers. Whatever his relationship with Pakistan, he should not have told them about his deals with the father of Pakistan atomic bomb.

Whoever has sympathy for Gadhafi, “African king of Kings” as he calls himself, cannot afford to waste it on a mad dog that bites everyone and may now bite himself. So please let him die as he wishes and his people will pronounce him a martyr or a villain.