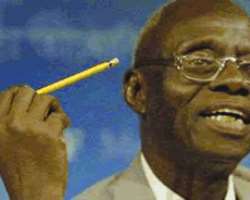 He is particularly disappointed with his political ally, Mallam Adamu Ciroma, whom he accused of bad faith and of 'acting out a script written by some other politicians in the North. I have been telling people that NPFL or any other political interest in the North for that matter should have been known to me because I am the oldest political leader in the North, who is still alive, active and relevant in the politics of Nigeria today. Others have since said they have resigned from politics and they have not been saying anything.'

If we support Jega, I think Jega means well, he is serious and means business. I will appeal that politicians, stakeholders should all support him so that we can have free, fair and credible elections. We used to have that in the past. For example, in 1959 when I was elected into the House of Representatives, my elections and those of the other members were very free, fair and credible. It was after that that we started hearing about rigging. During my college days, we didn't hear anything like rigging. I was shocked later when people started talking about rigging and when I asked what they meant by rigging, they said it means changing an authentic result to something else.

'That was what brought about the disturbances in the political scene. It caused some crises in some parts of the South. Because of the absence of free, fair and credible elections at that time, the military who were not well disciplined at that time, came in and said they were trying to save the situation. This later led to the civil war. After the war, in 1979, election was free and fair again. That election was conducted by the military, but it was free and fair. The one that was conducted by the colonial people in 1959 was free and fair. But subsequent elections that were conducted by politicians either in 1961 or 1964 were not free, fair and credible. I am telling you because I watched them. I want you to know and I have looked at it critically, they were not credible. There were cries about rigging all over.

Then when we had the Second Republic election conducted by the military, it was free, fair and credible. But it changed again when civilians conducted the subsequent ones. They were not free and fair. You know very well where elections were rigged in the South-West, in places like Ondo, Oyo and in the present South East-state of Anambra. All over the place elections were rigged.

Registration of voters should be a continuos exercise

It is the duty of the electoral umpire to cross-check and find out those who were de-enfranchised: It is very, very important.

Those de-enfranchised should be registered.   In democracy, in Britain today, people still being registered daily.  Any time when they are of age, that is 18 years, they go and register. The register should be left open so that even if you attain the voting age of 18 next month, you go and register. That is the norm all over. You don't shut people out of registration and elections.' For those who are now of voting age and couldn't be registered, the PDP chieftain asked INEC to commence arrangement for their registration under special consideration. 'INEC should please go and register these people under special consideration. It is very important.'

On the arrangement INEC is putting on the ground for the April polls? I am coming to that. During the PDP transition, Chief Olusegun Obasanjo successfully tried to transit from civilian to civilian regime.

We must give him credit for that, although there were some complaints here and there but he did his best. It was not his fault. The present INEC has said they would overcome that. So, let us believe that they will overcome it and we would have free, fair and credible elections.'

Blame governors for the war between PDP and INEC
The problem is with some  state governors who will like to take the party as if it is their property and wouldn't want their opponents to have a free contest. Definitely, that will bring some problems. I am appealing to these governors that are in all the political parties; let them have a free and fair mind to allow for the free conduct of primaries in their states. Some people feel that once you are a governor, you own the party and would not allow some people to be members of that political party. And if he is a member of that party, he must be their stooge. That is wrong and it is not what democracy is all about.'

Does that not confirm the fears that elections in these states may not be free and fair? 'It may not necessarily be because elections would not be run or conducted by the governors. They are supposed to be conducted by an independent body, that is the INEC. So, INEC is not the government.'

Ciroma is acting a script
The NPLF led by Ciroma, insisting that the North must produce the next President and on Ciroma revisiting an agenda which ought to have been closed after the primary.

North, I don't think that is Adamu talking. I am sure some people are trying to use Adamu. The Adamu Ciroma that I know wouldn't say things like that.'

I recalled how Ciroma and other northern political leaders met with him in Jos and took the decision to cede political power to the South-West: It was here (Jos) that we held a meeting with Ciroma. It was just to solve the problem of the South West for the annulment of the June 12 election when the South-West said they would not participate in the elections of 1999.

I have been telling people that Northern Political Forum or any other political interest in the North for that matter should have been known to me because I am the oldest political leader in the North, who is still alive, who is still active and relevant in the politics of Nigeria today. Others have since said they have resigned from politics and they have not been saying anything. Adamu Ciroma is still active in politics and we have been meeting. I am surprised that he said this type of thing.

On his meeting with Ciroma and being the oldest political leader in the North, who is alive and relevant today, why have they not been taking me into confidence in all political matters affecting the region? I am telling you that this is not a northern political forum. They are acting some people's script.

On threats that the NPFL might inspire protest votes from northerners against the PDP, I don't think so, even when there was no zoning, protest votes have always been there. When any group feels that their interests have not been taken into consideration, they may do that; but I do not think that would affect the fortunes of the PDP in the next elections. I believe that the result of the last PDP presidential primary should have discovered to the apostles of zoning that the PDP candidate, President Jonathan is loved by northerners:

Probe Salami's allegations against the CJN
Commenting on the row between the Chief Justice of Nigeria, (CJN), Justice Aloysius Katsina-Alu and President of the Court of Appeal, Justice Isa Ayo Salami over the latter's controversial promotion to the Supreme Court, Lar, who is also a lawyer, submitted that with the high respect for the judiciary coupled with the renewed confidence Nigerians repose in that estate of the realm, rushing the matter would deal a devastating blow on the justice system:

'I am not happy that the rule of law has not been followed in the seeming rift between the CJN and President of the Court of Appeal.

I think it is a rather unfortunate thing. We have only been hearing from one side, from the President about what transpired; we have not heard from the CJN. And I think anything that concerns the Judiciary should not be discussed in the public like that. There should be a laid down way of going about it.

'In any case, if it is about going to the Supreme Court, whatever recommendation that the National Judicial Council makes is not the final. They can only recommend a Justice to Mr. President.

The President will in turn send the name of the nominee to the Senate for approval before the whole thing can end.  If we say we have the rule of law, then those who are passing judgement  already are not doing the right thing. You have to hear both sides. That is what we call fair hearing in law. This time, you are hearing only one side. Wait until you hear the other side too before you pass judgement. In any case, we are not to pass judgement. The judiciary has its own way of looking into its problems and challenges. So, people should give the judiciary that respect.'

However, Salami, dropped the case he filed against the CJN, citing what he said was the 'intervention of well-meaning Nigerians.'  Justice Salami sued the CJN over what he described as his 'unholy' promotion to the Supreme Court and also accused him of interfering with his job in the Appeal Court. Would Lar be surprised that the case was withdrawn? Although Lar lauded the idea of dropping the case, he asked those concerned to 'cross check some of the allegations. What we want is a very honest and sincere judiciary; but in doing so, the rule of law must be strictly followed.'