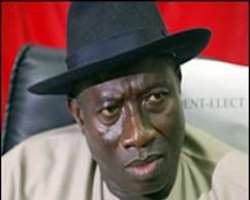 Goodluck Jonathan
Several people were feared to have been killed on Saturday in a stampede at an election campaign rally for Nigerian President Goodluck Jonathan in the oil city of Port Harcourt, witnesses said.

Thousands of ruling party supporters crowded into a sports stadium to hear Jonathan speak and hundreds more gathered around the gates. There was a stampede after a policeman fired into the air to try to disperse the crush as people left, witnesses said.

"I can see the bodies of three women," one witness, Tonye Ben, told Reuters. Other witnesses said as many as 10 people had been killed.

Police spokeswoman Rita Inoma-Abbey confirmed that several people had collapsed and been taken to hospital but said she could not immediately confirm whether anyone had died.

The People's Democratic Party (PDP) rally in Port Harcourt comes at the end of a week-long tour by Jonathan of the six main regions in Africa's most populous nation ahead of presidential, parliamentary and state governorship elections in April.


Jonathan is the first head of state from the Niger Delta, of which Port Harcourt is the main city, and is considered the front-runner in the presidential race.