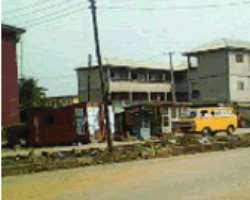 Elder statesman, chief Anthony Enahoro, who could best be described as the last man standing in the clamour for Nigeria's Independence recently passed on. And of course, he died with his legacies.

But there are some other great men whose legacies seem to be slipping off, even as they have not breathed their last. One of such is Chief Lateef Jakande a former governor of Lagos State. There is no better way to describe the dilapidation that has taken over the low cost housing estates built by his administration in 1982.

Given the failures of federal and state governments to provide affordable housing for its citizenry, the Jakande administration's initiative of building low cost housing estates remains to be beaten in the provision of affordable housing throughout the country.

No government, past and present, has surpassed the Jakande administration in the provision of the mass housing that has accommodated Nigerians from different parts of the country in Lagos State. The facilities put together for the comfort and enjoyment of residents included good road networks, drainage systems, recreation parks, security, central sewage systems, pipe-borne water, open spaces and buffer zones to give the estates a natural habitat.

However, these sprawling estates consisting of 20,000 housing units are presently in a sorry state. Anyone who had visited the estates in their days of glory would weep at the decay and total neglect that have characterized these once upon a time beautiful places.

For now, it is not in doubt that the original picture which the old man had in mind in drawing the plan had been eroded, chiefly, by lack of maintenance. The LSDPC Housing Estate located at Oke Afa, Isolo no doubt falls into the category of projects that have suffered serious neglect and abandonment simply because they are owned and managed by the state.

Apart from the unending knotty traffic that has made life unbearable for residents in that area, the eternal power failure often throws the entire place into darkness leaving it with no less a picture than that of a jungle. If you are worried about the total defacement with a flood of unapproved shops and kiosks littered everywhere, the fact that reserved areas originally meant for recreation as well as playgrounds for children have gradually been converted to residential areas becomes more worrisome.

To say that the illegal erection of these lock-up shops is a total affront to the legacy of the Jakande regime is merely stating the obvious. As such, it is left more like a refugee camp than an estate.

Some open spaces, which had initially been left for library services, recreation and parking lots, have gradually been taken over with structures.

The general picture of wear and tear is most evident as many of the walls of the buildings have not seen any form of face-lift since the last layer of paints were administered on them in the early 80s, even though some were re-touched about two years ago on account of a mandate issued to owners by the Lagos State Building Authority. The interior of some of the houses is nothing to write home about

Indeed, this estate has become a glorified slum occasioned by the general decay of the infrastructure and the distortion of the original master plan. Most of the facilities in the estate have broken down and nobody seems to care a hoot. Illegal and substandard structures, blocked drains, bushes and artisans workshops have defaced the landscape such that those who saw the glory of the estate at its commissioning will weep at the present state.

Undoubtedly, because maintenance culture is alien to many in this part of the world, the level of decay magnifies here in the area of drainages and sewages. All the drainages are filled with refuse dumps so much so that at the slightest rain drop, everywhere becomes flooded. Many residents, too, do not help matters in this regard as they deliberately fill the drainages with trash and general poor sanitary habit.

The only road leading into the estate has been under rehabilitation since early last year. Even now, it is far from being completed. This has not only worsened the traffic situation around that axis, but has brought untold hardships to the people. Aside from this, all the existing roads inside the estate have completely collapsed. They are now gullies and ditches.

Mr. Oluwole, a resident told Daily Sun that when he moved into the estate, it was like a paradise.

'We lacked nothing as the facilities, which were the best anywhere, were functional,' he recalled.

According to him, commercial buses were not allowed to ply the roads in the estate neither were shops and kiosks allowed in the master-plan.

'It was a decent estate for decent people and we were on top of the world then. But all that is now history as the estate is now inhabited by all sorts of people.'

Mrs. Grace Onajobi who packed into the estate just two years after the commissioning said: 'When we came in, taps were flowing, the whole place was so beautiful, but look at the state of the place now, it is in such a terrible state.

'Look at the roads, they have all become impassable. I think the government of the day has simply forgotten us.'

Another resident who spoke on condition of anonymity directs his anger at the present local government council for the complete collapse of the road. Hear him: 'Yes, it is agreed that the structures within the estate have collapsed. But is it the reason why the Local Government chairman, Mr. Kehinde Bamgbetan has refused to fix the only road leading to the place?

'If Alhaji Jakande had not built the estate and residents live and sing his praises now, where would Bamgbetan have got the people who voted him as the present council boss? I don't blame them at all. It just seems to me like the estate residents are not lucky with their local government chairmen. It was the same thing Ayo Ositelu did and forgot us.'

'When we came here in 1986, everything was in place. We had water, good roads and electricity. The tap no longer flows. Residents pay a token sum of money as service and maintenance charge to the LSDPC, but apart from a few isolated cases when staff of the corporation came to carry out some maintenance work, the actual day to day maintenance of the estate is carried out by the residents,' Mrs. Ogbomo Udugaran, another aggrieved resident, asserted.