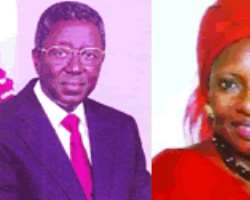 In the past 10 years of Nigeria's democracy, one occurrence that has featured repeatedly across many states is the wrangling between state governors and their deputies. It is an unwritten law that sequel to party primaries, governorship aspirants 'shop' for suitable running mates that will be loyal to them if they eventually emerge as governors. However, midway into the tenure of these governors, tension and mistrust usually start to build up between them and their deputies and in most cases, it escalates to the point of enmity.

The obvious question observers ask why this has become a trend, across the country. The Constitution recognizes only one executive in Nigeria, both at the federal and state levels, and thus makes the position of deputies as appendages.

Senatorial aspirant and former deputy governor of Anambra State, Prince Chinedu Emeka, tells Daily Sun that the provisions of sections 169 and 172 (1) of the constitution, detache the deputy governor from a state's executive apparatus, and a deputy owes much of the activities that are laden on his lap to the mercy and discretion of the incumbent.

The deputies should have their powers emanating from the cordial relationship with the governors, and the governors in turn should be broadminded enough to take advice from the deputy since he is someone he chose.

The present situation is perfect as it is. If anyone wants to be the deputy governor, he should read the Constitution and see that his powers will emanate from the governor and if the person does not want that, he should wait till he has the chance to become governor. There should be an understanding that the role is more of one that is assisting the governor.'

Another school of thought argues that the acrimony that usually prevails between the governors and their deputies is based on the popularity of the deputy which most times the governor sees as a threat. An instance is the case in Plateau where the incumbent deputy is said to have a stronger political structure which was used to influence the election of the governor.

Other factors that put a strain to the relationship between number one and two persons in the states may be the fear of being 'overthrown' by ambitious deputies or situations where governors tend to accrue all the executive powers to the displeasure of his deputy.

Other reasons may also be differences in policies, political interests and style of administration and these have contributed to the growing trend of warring governors and deputies.

Abia State
The relationship between Governor Theodore Orji and his erstwhile deputy, Chris Akomas, turned frosty when the governor left the Progressive Peoples Alliance (PPA) where he was elected, and joined the All Progressives Grand Alliance (APGA).

His defection to APGA came on the heels of the rift between him and former governor of Abia, Dr. Orji Kalu, who facilitated his election into Government House.

When he left PPA for APGA and later to the Peoples Democratic Party (PDP), Akomas who refused to jump ship with him came under fire and one of his alleged sins was his loyalty to the former Governor.

His refusal to defect with him no doubt infuriated his boss, who allegedly orchestrated his impeachment by the state House of Assembly.

When his boss, Governor Isa Yuguda, who was elected on the platform of the All Nigeria Peoples Party (ANPP), defected to the PDP, he was expected to display his loyalty to his 'benefactor' and jump ship too. But Gadi thought otherwise. He felt his loyalty should be with the party on whose platform he was elected. So, he refused to defect and that marked the beginning of the war between him and his boss.

When he refused to defect, the state House of Assembly suddenly invoked a constitutional provision on 'gross misconduct and financial misappropriation' and an impeachment notice was served him.

After a seven-man panel was set up to probe him, he was found 'guilty' of approving various contracts above his approval limits and 25 out of the 31 members of the House impeached him.

Bayelsa State
The feud between the incumbent governor of Bayelsa, Timipre Sylva and his erstwhile deputy, Peremobowei Ebebi, is one of those that ended in impeachment.

Ebebi rose through being a member of the House of Assembly to becoming the speaker during the period when Diepreye Alamieyeseigha was governor. Alamieyeseigha's ordeal which led to his impeachment saw Ebebi becoming the deputy governor while Dr. Goodluck Jonathan took over as governor. When Sylva emerged as governor in the 2007 elections, speculations had it that Ebebi was literarily 'foisted' on Sylva as his deputy.

However, the alleged 'vaulting ambition' of Ebebi put him at daggers drawn with his boss, and it was not long when an impeachment notice was served on him with allegations ranging from financial misappropriation to gross misconduct.

He was later impeached by 18 out of the 24 members of the House.

Plateau State
The relationship between Governor Jonah Jang and his deputy, Paullen Tallen, is also one of the love-gone-sour stories.

At the end of the turbulent tenure of the former governor, Chief Joshua Dariye, the PDP felt that fielding another candidate will better their chances of clinching to the state.

The choice of Tallen as Jang's deputy is said to be as a result of her closeness to former President Olusegun Obasanjo and she was said to have contributed greatly to the election of Jang.

All went smoothly between the duo until Tallen started nursing the ambition to be governor and the walls of their friendship began to crack.

Already, she has joined the gubernatorial race and has defected to the Labour Party(LP) along with her supporters.

Anambra State
The feud between the incumbent Governor of Anambra State, Mr. Peter Obi and his former deputy, Dame Virgy Etiaba came to the fore when Obi was impeached by the State House of Assembly.

After Obi's sack, Etiaba took over the reins of power, but was later accused of being indifferent to the plight of her boss and was projecting her son, Mr. Emeka Etiaba to become governor.

When Obi was reinstated and he contested the February election last year, he dropped Etiaba and picked Mr. Emeka Sibeudu as his deputy.

Akwa Ibom State
The former governor of Akwa Ibom State, Obong Victor Attah, could not work in agreement with his deputy, Obong Chris Ekpenyong for reasons bordering on 'disloyalty', 'irreconcilable differences' and 'ambition.'

The crisis between the two resulted in the impeachment of Ekpeyong, though he was later asked to resign after the national leadership of the PDP waded into the crisis.

Lagos State
The feud between the former governor of Lagos State, Bola Ahmed Tinubu and his deputies will linger in the minds of Lagosians for a long time.

He and his first deputy, Mrs. Kofo Bucknor-Akerele has such sharp misunderstanding that she was forced to resign after three as deputy. She was later replaced with Mr. Femi Pedro who also fell out with Tinubu when he started nursing a governorship ambition.

Enugu State
The war between former Governor Chimaroke Nnamani and his erstwhile deputy, Okechuwku Itanyi, is one that could have been described as silent and cold. While they held sway as the numbers one and two persons in the state, the deputy governor was sidelined in most of the activities of government and his position rendered redundant.

Oyo State
When the incumbent governor of Oyo State, Adebayo Alao- Akala was the deputy to Rashidi Ladoja, he took advantage of the feud between his former boss and the late strong man of Ibadan politics, chief Lamidi Adedibu to assert himself in power.

The war between the godfather(Adedibu) and his godson(Ladoja) which arose out of the refusal of the latter to make returns to the former led to the impeachment of Ladoja and when Akala took over the reins of power, he asserted himself further.

Even though the court nullified the impeachment and reinstated him, the feud worsened till the end of his tenure.