25% OF BUDGET: SANUSI HAS APOLOGISED TO N'ASSEMBLY - MAKARFI 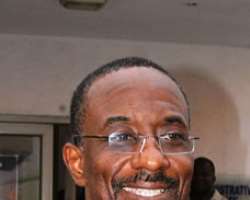 Chairman, Senate Committee on Finance, Senator Ahmed Makarfi has said that Nigerians did not understand the Central Bank Governor, Sanusi Lamido Sanusi, when he (Sanusi) said members of the National Assembly alone were spending 25 per cent of the country's annual budget.

Makarfi, who spoke to journalists in Kaduna at an interactive forum disclosed that he received a letter from Sanusi, in which the CBN boss allegedly apologised to the National Assembly over the controversial 25 per cent and blamed Nigerians for misquoting him.

The CBN governor had some time late last year stirred the hornet's nest when he told Nigerians that members of the National Assembly were spending a total of 25 per cent out of the nation's annual total budget. This had since generated debate across the country.

'CBN Governor, Sanusi Lamido Sanusi, did not say that the National Assembly was consuming 25 per cent of the nation's annual budget.

'As a result of this, the Senate set up a committee which they asked me to chair to find out similar parliaments and what we have discovered so far, first of all, the parliaments are not even willing to give us information about their expenses since it is parliament to parliament, so you can see, this is something generally used to find out about parliaments.

'But we will go comprehensively for some developed democracies and there is a different between take home pay and also running cost. National Assembly does not fix its take home pay like every public officer; the Revenue Mobilisation, Allocation and Fiscal Commission (RMAFC) does that. The National Assembly cannot increase one kobo on top of it.

'The Senate president and the speaker of the House had repeatedly made clear that the National Assembly is willing to lead the way in bringing down the cost of running government because we need to tell ourselves the home truth; when something is not sustainable, we say it is not sustainable and that is the position, that is what is going on.

'So I have to correct the statement Sanusi made, he didn't say what exactly you said, and he himself repeated it, but whatever it may be, how much does it cost to run government, and that government is not National Assembly alone, government is all arms, and we are committed to bringing down the cost of running government.'      END