ACCRA: A FEEL OF GHANA'S PULSE, AND MORE 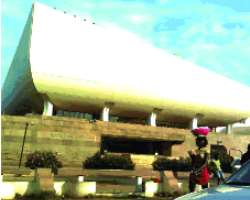 Photo: MAURICE ARCHIBONG
Welcome to Accra, capital of Ghana; formerly called Gold Coast. This is Accra, where the aborigines speak a language different to their own. Ga is the language of Accra's natives, but they; like the majority of Ghanaians you are likely to meet, speak the Ashanti tongue; called Twi.

Although Ghana boasts many indigenous tongues; such as Ewe, Fanti, Hausa and Waa etc, many tourists are wont to believe that Twi has more or less evolved into Ghana's indigenous lingua franca. A former British colony, Ghana's official language is English; but, Twi is so widely used that some newspaper articles end up as what one might call 'Twi-glish', a sort of amalgam of Twi and English.

As with the print media, so the language from Accra's ever increasing radio stations; where you can intuitively follow the often heated debates between numerous listeners on one hand, and the programme presenters on the other. When we came this way late last year, the Ghanaian President John Atta Mills was the butt of strident criticisms over scarcity of cooking gas.

Given the prevailing mood then, it would have been difficult to convince any one that, if an early election were called; Dr. Mills would have returned to the presidential villa. Such was the anger in the voice of commentators on various call-in programmes on different radio stations that one didn't need to understand Twi to guess how unhappy some Ghanaians were with their rulers. For confirmation, however, we often asked the driver of the taxi we were riding in to clue us in; and, usually, the translations merely proved us right.

Fortunately for President Mills; in spite of another increase in petroleum product prices, which came into effect from Monday, January 3, 2011; his (unofficial) approval rating had notched many points up during our latest trip to Ghana. At least, two reasons are responsible for the restoration of Dr. Mills' popularity; the recent lifting of Ghana's first oil export and enviable endorsement earned from an international monitoring group readily come to mind here.

Ghana is Gold Coast again
Ghana is rolling in gold again; except that the gold is black and liquid this time. The old Gold Coast has finally taken its place among the world's petroleum-exporting countries. To be candid, many of Accra's streets are still littered with destitute, and you couldn't miss the occasional sight of some famish-stricken mendicants or people that seem lost, completely carried away and engrossed in monologues, all in a world all their own; walking past you.

For want of words, we had described them as collateral damage from Ghana's war with poverty. Apart from these poor and homeless Ghanaians, light skin and curly-haired vagrants, believed to be immigrants from neighbouring Chad, Niger, Mauritania etc have come to further swell the population of beggars you encounter on the streets, here.

In any case, my latest arrival in Accra seemed well-timed enough because I was in Ghana before the first vessel to load oil from FPSO Kwame Nkrumah at the Jubilee Field berthed in these parts. That ship, Mt. Spike, docked at the Anchorage of Tema Ports in the early hours of Monday, January 3, 2011.

A report in the Ghanaian government-owned Daily Graphic newspaper, identified Messrs Hull Blyth Limited as the local agent of Mt. Spike, which is registered in Malta. It is worth noting that this vessel's last port of call, Libya, was documented. Interestingly, even though Muammar Khadafy's country is a major oil-exporter; Mt. Spike was not allowed to simply glide into Ghanaian waters to lift oil without prior checks by Ghana Maritime Authority (GMA) to confirm she passed international safety standards for carrying out such functions.

Confirming the vessel's arrival in Ghana to Daily Graphic, GMA Communications Director, Mrs. Eleanor Pratt, stressed her agency's commitment to ensuring that only ships that met international benchmarks in the oil industry would be allowed to lift processed petroleum products at Jubilee Field.

Barely two weeks earlier, on December 15, 2010; President Mills, had performed the rites of turning the wheels at FPSO Kwame Nkrumah signalling its formal launch. According to reports, Dr. Mills had on that occasion re-echoed his promise of transparent governance and prudent management of the oil revenue for the benefit of all Ghanaians.

Paradoxically, however, the official launch of the flow of Ghana's oil would be remembered by many because it coincided with an increase of 25 to 30 per cent in the pump price of refined petroleum products at local filling stations. In fact, the same edition of Daily Graphic, Tuesday, January 4, 2011; which reported the arrival of Mt. Spike on its back page, actually ran 'Petroleum prices up' among its front-page stories.

'The National Petroleum Authority (NPA)', The Graphic stated; 'has announced petroleum price increases of between 25 and 30 per cent as a result of rising world crude prices'. Consequently, the prices of petrol had gone up from 113.98Gp (Ghana-pesewas) to 152.07 Gp, while that of diesel rose from 118.05Gp to 153.4Gp.

According to Daily Graphic, increase in the debt recovery levy, from 2Gp to 8Gp, recently approved by the Parliament was also responsible for the rise in pump prices of fuel. Interestingly, some Ghanaian commercial vehicles' operators had tried to cash in on the price increases, akin to the situation in Nigeria, where bus and taxi operators quickly seize the excuse of fuel price hike by government to rake in huge profits for themselves.

However, whereas the margin of increase was pegged at 18 per cent, some bus conductors or 'driver's mate' as they are known here, had tried to squeeze more out of commuters. This had resulted in street fights and other ugly scenes uncommon in Accra because most passengers simply refused to be robbed.

Returning to a more cheery note, however, the Ghanaian authorities must be commended for their sentience and stance to abide by good conscience; for, while pledging to deploy revenue earned from oil export to the development of all Ghanaians and every part of their country; the government, apparently having learnt from the Nigerian tragedy, where after mining oil in the Niger Delta with blatant disregard to basic ecological considerations, which leave the environment devastated; the oil-bearing communities are most of the time completely side-tracked in the wealth-sharing and political empowerment processes.

The Nigerian state also stole billions of dollars from Niger-Delta communities through such obnoxious throw-ups as 'Off-shore/On-shore Dichotomy', and practically murdered its own citizens to please notoriously criminally-minded executives of at least one international oil giant. Finally, even the worm was going to turn; and, when it happened; some were going to make sure that militancy in the Niger-Delta becomes a never-ending story since it has become another way of siphoning more revenue from the national treasury.

It is worth noting that for more than a year, before the first oil export took place; there had been series of workshops and seminars on oil exploration and exploitation as well as carrying along members of oil-bearing communities across Ghana; all aimed at averting the tragedy, which criminally-minded Nigerian leaders have turned their country to. Ghana seems wiser; if Nigeria had committed even 10 per cent of the oil proceeds to developing the Niger-Delta; everyone would be happier for it.

Aside selling crude oil, Ghana is complementing oil receipts with money from natural gas. Yes; the same gas that Shell and others have, through collusion with senseless Nigerian leaders, been flaring and destroying the environment. We go back to Daily Graphic, whose screaming headline, '$1.2bn GAS PROJECT ON TRACK', for its lead story is preceded by a kicker that claims 'All bottlenecks cleared'.

More grease to President Mills' elbow
Another plus for the old Gold Coast: Ghana's President Mills and four others rated high in the African Presidents Index. In the rating, which measures performance and leadership styles of leaders in the continent; the Ghanaian President scored an A alongside Prime Minister of Mauritius, Mr. Navinchandra Ramgoolam; President of Cape Verdes Pedro Verona Pires; President of Botswana, Seretse Ian Khama; and, President of Namibia, Hifikepunye Lucas Pohamba.

But, this African Presidents Index is like a coin; which has an obverse side. Taking up the rear are those, whose scores ranged between zero and 30 per cent in the Index; and, not surprisingly; Sudan's notorious President, Omar Bashir shares this category with his opposite numbers in, among others, Chad, Equatorial Guinea and Eritrea.

Inside the Ghanaian capital
Standing at Kwame Nkrumah Circle, for example, and hearing the yelp of 'Accra'! 'Accra'! 'UTC'! 'Accra'!!; from bus drivers' mates; the impression this leaves on a first-time visitor is that this 'Circle', seen by many as the very heart of the Ghanaian capital is located outside Accra. However, although Kwame Nkrumah Circle is part of Accra North Constituency, it wasn't originally part of ancient Accra.

The original Accra lay at Ayawaso, many kilometres away from today's Ghanaian capital; and, the Accra these bus operators refer to nowadays starts around Makola Market and extends beyond the GPO (General Post Office), which is located vicinal to an antique storey building called WATO (West African Trading Organisation) and all the way to the Palace of the 'Ga Mantse' and beyond. The palace of the Ga monarch is a few minutes' walk from the city's maximum prison.

It is worth recalling that Ussher Fort had earlier served as maximum jailhouse before that role passed on to Fort James. Ussher Fort is now headquarters of the Monuments unit of Ghana Museums and Monuments Board (GMMB). Ussher Fort complex also boasts a museum nowadays; but, when we first toured this heritage site in 1997, as part of our trip to cover Ghana's 40th independence anniversary; we were shown, among others, a small spot, where prayers were said for condemned persons before their execution. We were also reminded that Flight Lieutenant Jerry Rawlings and others were at some point detained here before their loyalists freed them after another coup, which eventually paved the way to Ghana's social and political renaissance.

Where to stay, where to go
Before you leave Accra, visit the local National Museum on Barnes Road. Ghana's National Museum stands a walking distance from the country's National Theatre, and both venues often offer much to see. Interestingly, these houses of entertainment and culture are located vicinal to numerous hotels and lodges. At least, a dozen hotels and inns, including Novotel Hotel (the uppermost limit, price wise), followed by Niagara Hotel and Beverly Hills Hotel as well as moderately priced affairs like Eclipse Hotel, Hotel de California, St. Sam Hotel et cetera all stand within 3km radius from the National Theatre.

For reliable comparison, we spent three consecutive nights in three different hotels: It cost 25Gcedi (roughly N2,500), 20Gcedi (approximately N2,100) and 38Gcedi (barely N4,000) at Pacific Hotel, Hotel de California and Eclipse Hotel respectively. Although each of the lodgings had toilet/bathroom en suite as well as TV; interestingly, the N4,000 room at Eclipse Hotel also offered an air-conditioner, and was also much roomier.

The Kwame Nkrumah Mausoleum; Ussher Fort; Artists' Alliance Gallery around Labadi on the Old Tema Road; The Loom, Accra's first art gallery around Kwame Nkrumah Circle; African Markets in Osu; WATO House opposite the GPO; Danquah Circle, which throws up numerous bars and clubs including Indigo; are among Accra's other attractions.

If the tourist is too fagged-out to trek, say after a busy day sightseeing or having had too heavy a meal, for example; a taxi ride comes relatively cheap in Accra, where you can travel some 10km in a chartered taxi for roughly 5Gcedi, the equivalent of less than N600. The tourist even has a cheaper option travelling in a tro-tro; where the fare could be as little as 40Gpesewas (less than N50).