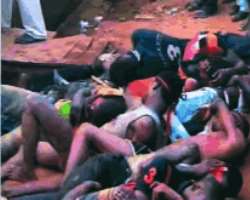 Victims
A murder case appears to have been caught in a web of intrigues in Lagos, Nigeria's economic honey pot. At the centre of the game are families of seven men, who were allegedly abducted and killed in Ayobo, a community on the outskirts of Lagos, when they tried to carry out a court judgment over a wide expanse of land, at Igbo-Ilogbo, Alaja Megida Road, Ayobo.

A legal document made available to Daily Sun also indicted a community Chief, as one of those involved in the killing. He was also among the suspects prosecuted at High Court 37, Ikeja, over the alleged murder. Meanwhile the grieving family members have raised alarm that the suspects and their accomplices are now trying to politicize the murder of the seven men.

For instance, as the case was progressing, the accused persons, who claimed to be members of the Action Congress of Nigeria (ACN), allegedly contacted leaders of the party in Lagos, to assist them to stop the complainants, whom they branded agents of the Peoples Democratic Party (PDP).

Using the chambers of the National Legal Adviser of ACN, Mr. Muiz Banire, M.A Banire & Associates, the case was struck out after two court sittings on December 20, and January 11.

The Deputy Director, Public Prosecution (DPP) in Lagos, Ms O.O. Eboda told the Judge she wanted to withdraw the information already filed. 'We have received petitions and representations from members of the public in respect of this matter and the Director of Public Prosecution's office wishes to review the legal advice it gave, with a view to filing fresh information on a later day. We rely on section 73 of the Administration of Criminal Justice Law,' she told the judge.

It was based on Ms Eboda's submission that Justice L.A. Okunnu struck out the case in its 'entirety.'

The DPP, Mrs. Olabisi Ogungbesan, on behalf of the state's Attorney-General and Commissioner for Justice, advised the police authorities on what to do with the case. The letter was also copied to the presiding magistrate.

The legal advice, on the murder case between the Commissioner of Police and Oba Arole Idowu Ojo-Ijo, chief Nojimu Tiamiyu Bada, Mojudeen Anisere, Tajudeen Balogun, Yusuf Adeyinka and Dayo Akinrinade, reads in part: 'I am directed to refer to your letter with reference No. CB 3514/4/FHQ/ABJ/Vol.2/61 dated 18th January, 2010, together with the attached duplicate case file forwarded to this office for Legal Advice.'

'All the above ingredients are sufficient evidence of the eyewitnesses, as regards the events leading to the death of the two deceased persons (Abiodun Oyejobi and Muritala Jinadu), linking the suspects to their deaths. While page A6 categorically stated that he saw page B1 bring out a charm with which he hit one of the deceased persons; page A7, A8 and A9 corroborated page A6 that, after being nearly beaten to death by agents of the suspects herein, they were taken to page B1's palace for further torture, before those of them who were alive were handed over to the police.

'Police investigation reports also confirm that page B1, acting in concert with his chiefs and aides (page B2-B6) mobilized the residents and OPC men in the area against Chief Arimiyu Bello Ekundayo and his agents, to prevent the latter from executing a court judgment granted in his favour over certain acres of land at Ayobo area of Lagos State, and in the ensuing fracas, the two deceased, who were reportedly working for Chief Arimiyu Bello Ekundayo, were murdered…'

It was gathered that Oyejobi, Jinadu and other victims, alongside their surveyors and other agents went to the site on July 10, 2010, to take charge, two months after they were given the go-ahead in a court judgment, in suit: ID/1722/92, Arimiyu Bello Vs Taiwo Ogunbiyi & others. They were allegedly tortured and dragged to the chief's palace, where they received further beatings, which resulted in their deaths.

The complainants claimed that seven persons were killed at the palace. Three bodies were said to have been recovered, while the other four have since not been found.

Reacting to the allegation, the accused community Chief, Arole Idowu Ojo-Ijo, denied the claim that seven persons died during the crisis. According to him, only two persons lost their lives. He said: 'I didn't set my eyes on any of the people arrested. I stayed in my palace throughout. I didn't join in beating any one and nobody was brought to my palace as alleged. It was through the DPO that I got to know that two persons died during the incident.'

He, however, admitted that there had been land dispute at Bada, Alaja, Koloba, Megida, Lala, Onikonga, Elegbede and part of Ayobo Central market before he became the leader of the community.