INEC DID NOT SENSITISE NIGERIANS ENOUGH ON THE VOTERS' REGISTRATION, SAYS OKOYE 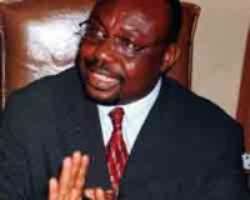 WHAT are the things that should be done now to ensure credible elections in April?

For us to have an election that is different from the past, a free, fair and transparent election, there are irreducible ingredients that must be present. One is that we must have a credible voters' register. Secondly, we must have a clear and unambiguous constitutional and electoral framework to guide the conduct of the elections. All those involved in the electoral process must know the status of the law since any change in the middle of the game will affect people as far as the conduct of the election is concerned. The third variable is the conduct of primaries by political parties. They must create a level playing ground and a good environment for all aspirants. Another factor is to avoid violence.

The voters' registration is going on and there are complaints…

Despite the difficulties, the people are enthusiastic and they want to go out and get registered. Unfortunately, we have had very teething problems with the exercise. But I believe that as the exercise progresses, these problems will ease and afford people the opportunity to register. One problem however is that the Independent National Electoral Commission (INEC) has not carried out enough sensitisation of the Nigerian people regarding what to expect when they go to register. Many Nigerians thought that they could just walk into the registration centre and within two minutes, they are out. The commission ought to have explained to the people how the Direct Data Capturing machines functions so that those handling are not seen as the problem at the centres. But they were exposed in terms of the fact that some of them were coupling the machines for the first time on the opening day of the exercise.

But it is a good sign that Nigerians are determined to have a new voters' register. With determination, we can get it right because if we don't get the voters' registrations right, we cannot get the elections right.

Do you think that the new method of registration will eliminate rigging?

The use of the machines will to a certain extent eliminate rigging. It will, to a large extent make it possible for the real voters to go the polling units on to vote. It may be possible to eliminate multiple registration because ordinarily there are people who register 10 or more times and use the cards for dubious activities on election day. Such persons may not have that opportunity now because of the finger print technology in the DDC machines. So, if you register twice, there is a possibility that the machine will detect and eliminate the person completely. Secondly, the electoral body wants to introduce the modified open ballot system for elections, which makes it possible for accreditation to take place between 9 am and 12 noon and for all polling units in the country to start voting at the same time. This is to keep each individual at one polling unit rather than have anyone jump from one unit to another. Altogether, the modified open ballot system, and the DDC technology will minimise rigging. It may not eliminate rigging completely.

With what happened in the re-run election in Delta State, do you think the modified open ballot system is feasible?

It is feasible to use the modified open ballot system for the election and get the conduct right. There were challenges with the re-run elections in Delta on account of other variables. The first is that by the provisions of the Electoral Act 2006, the voters' register to be used for that election was the register in place as at the date that first election because the persons who conducted that election are persons nominated by persons whose names were on the register as at the close of nomination in 2007. Secondly, there were multiple copies of the register because INEC gave the software of the register to the political parties and some of them printed copies and used them to confuse some of the presiding officers. The third issue was that INEC did not carry out proper training and sensitisation as to the fact that the modified open ballot system was going to be used. We had a situation where some elderly people came to the polling booths at 2 pm and were told that they did not participate in the accreditation held between 9 am and 12 noon and so, they could not vote. There was a situation where some people after accreditation went home thinking that they had voted. So, if you want to introduce a new system, you have to carry out massive and sustained comprehensive civic and voter education. This is why we still have many void ballots because some of the voters can still not identify the logo and symbol of the political parties they wants to vote for. I think that if we carry out sustained training for presiding officers and poll clerks, if we carry out sustained sensitisation for the people, at least two to three months before election on the modified open ballot system, I believe it can work.

Does the number of political parties enhance the conduct of free and fair elections?

Section 87 of the Electoral Act 2010, is made to eliminate godfatherism and institute internal democracy in the political parties. But the parties and the political elite are not ready to imbibe the values of constitutional democracy. That is why we have had crises in almost every party because most of them have tried to undermine the provisions of Sections 87 of the Electoral Act. Most of the parties do not have authentic registers of their members, which is why the same people who queued during the primaries of one party are the same people that lined up for the primaries in other parties.

The Electoral Act makes it very that INEC can reject any candidate submitted by the parties. Section 87(9) says that where a party fails to comply with the provisions of the Act in the conduct of primaries, its candidate shall not be included in the election for that particular position in issue. But we hear that there has been an amendment to the Electoral Act 2010. That amendment is said to undermine the provisions of this section to the effect that INEC will not have the right to reject any candidate. We can only have a credible election if the electoral offences commission bill is passed into law.

President Goodluck Jonathan, when he was Vice President presided over the interparty consultative committee on electoral reform. The parties claimed that the members of the Electoral Reforms Committee chaired by Justice Uwais were not politicians and so, they persuaded the late President Yar'Adua to establish an interparty consultative committee on electoral reform made of parties and politicians. They were the ones that drafted the Electoral Offences Commission bill and forwarded to the Electoral Reforms Committee. They drafted the bill and why are they afraid to bring it into reality? When we begin to make it clear that crime does not pay, people will behave.

Comment on money in politics
Sections 90, 91 and 92 of the Electoral Act deal with contributions to individuals and parties. The law limits the contributions. Section 90 says that INEC shall have the power to place limitations on the amount of money or other access which an individual or group can contribute to a party. But it notes that election expenses shall not exceed the sum stipulated in sub-section 2(7) of this section. It says that the maximum expenses to be incurred by a candidate at a presidential election shall be N1 billion, while that of a governorship candidate shall be N200 million. It also says that no individual or other entity shall donate more than N1 million to any candidate. The law is clear on some of these things.

It is argued that so much money and the power of incumbency distorts the credibility of any election.

It depends on the contest in which you are looking at free and fair election. Money plays a huge role in every democracy, but some democracy are able to limit it and catch those who spend I n excess of what is budgeted and what is provided for. But those countries are places where people do not carry so much cash. Nigeria is a cash economy and so, somebody can go and withdraw cash and give N200 million to somebody in a bag. How can you track such fund? But if an individual issues a check of N10 million when the law says you can only make N1 million contributions, there is a document with which you can hold the person and say, you have exceeded. That is part of the challenges we have in tracking dirty money in elections. It plays a role, but today, it is still difficult on how to curtail the influence of money in election.

What is your assessment of the journey to the April elections?

Most of the political parties still don't have an ideology that can put food on the table of the ordinary people. But it is important for us to be patient and moderate our expectations because if we expect so much and the system delivers little, frustration will set in and we begin to look for alternatives outside the constitutional. If we moderate our expectations, it is possible for us to keep hope alive and work on our democracy, knowing that one day, we might get it right. I think that we are getting to that situation.