CONFESSION OF AN ASPIRING MUSIC STAR 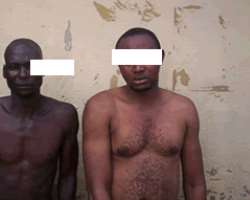 At the moment, he's full of regrets. Edward Utah is a Lagos-based upcoming artiste. In a bid to realize a lifelong dream of producing a Master CD, Utah said he became part of a seven-man armed robbery gang that had unleashed terror on the residents of Lagos at various times.

Within a short period, the 33-year-old man had allegedly participated in three different robbery operations that suddenly made him the owner of a Toyota Corolla car.

He's regretting now, however, following his arrest by policemen in Lagos. He told Daily Sun his story.

'I'm a musician. People call me Onyenekwu, which now has become my name. I didn't have money or financial supporter to help me in the project. So when my friends sold the idea of going to rob to me, I accepted. I believed it would be the easiest way for me to realize money.

'Two members of my gang are Yellow and the other is Blacky, but I don't know their real names. We usually hold meetings before we go for any operation. We usually use the small field at the Tolu School Complex, Olodi Apapa for our meetings. I have followed them for operation only three times.

'We used speed boat for the first operation at FESTAC Town where we scaled the fence of a building at about 1:30 am. After breaking the door of the duplex, we robbed the occupants of their N4.5 million. I received N650, 000 as my own share of the money and bought one Toyota Corolla car with it.

'We were seven that went for the operation. My role was to stand at the door with a cutlass to attack anybody who challenged us. The gang members that took part in the first operation were Yellow, Blacky, Joe, Shikran, Young and one other person whose name I cannot remember.'

Utah stated that the second operation he partook in was at Liverpool, Apapa. According to him, five of them went for the operation in a wooden canoe. They were said to have parked it at the Apapa axis of the Lagoon and found their way to the house they targeted. After scaling the fence of the building, they used a large chisel to cut the keys of the door.

The suspect added that the alarm raised by the occupants of the building did not deter them from carrying out their mission. They held the occupants captive and ransacked the house. But members of the gang were not happy when they left the house because they could not get more than two cheap mobile phones and a very little sum of money.

The three occupants of the house, he revealed, were beaten without mercy because their mobile phones were so inferior that they had to throw them into the lagoon as they left the scene. But he was able to get N14, 000 from the outing.

The outing that led to his undoing was the operation the gang reportedly went for at Ladipo Oluwole Street, Apapa. As gathered, the marauders broke one of the doors to a duplex in the street to perpetrate the alleged crime. But a resident, who reportedly owns a popular nightclub in the area, quickly alerted the Apapa Police Station to the danger.

A team of anti-robbery policemen led by the Divisional Police Officer (DPO) of the station, Mr. Muhammed Ali, a Chief Superintendent of Police, stormed the scene at about 2:00a.m. Utah was unlucky as he was apprehended. Four members of the gang reportedly escaped.

Utah, who claims he hails from Akwa Ibom State, allegedly told the police that after the gang had bound the guard's mouth, hands and feet, he was directed to watch over him with his cutlass. He added that when he suspected that the police were around, he attempted to escape but to no avail.

'The last operation, I was holding a cutlass and watching the security man while other gang members were operating inside the house. I did not know how they knew that the police had arrived. They escaped.

'As I dropped the cutlass and was trying to escape, policemen came out from different directions and pointed their guns at me. I had no option than to surrender,' he submitted.

But he told the police the address of one of the gang members, one Friday Ebuagu, 37, and the information led to the arrest of the suspected robber. Daily Sun learnt that some police detectives stormed Ebuagu's residence where they recovered six bags of Indian hemp.

Ebuagu's 16-year-old daughter allegedly told the crime fighters that her father sells Indian hemp and the business has been sustaining the family.

Apart from the Indian hemp, 10 fake dollar notes and a Toyota Corolla allegedly bought with stolen money were also recovered. Utah, however, told the police that Ebuagu did not participate in the first two operations, except the last one at Ladipo Oluwole Street.

Ebuagu, who introduced himself as a native of Kwale in Delta State, allegedly confessed that the Indian hemp recovered from him was worth N300, 000. He also claimed to be a resident of Osho Drive, Olodi Apapa. He stated that his wife divorced him about seven years ago after she had four children for him.

His words: 'I sell and smoke Indian hemp. I have never robbed before. This is my first time of following them for an operation. We planned the robbery at Tolu School Complex, Olodi-Apapa. We did not go with gun but we went with cutlasses.

'We stole a canoe from where it was parked at the Tolu axis and moved it to the backyard of a house on Marine Road, Apapa. From there, other gang members marched to Ladipo Oluwole Street in the area where they operated. My role was to remain in the canoe and watch out for any opposition. I also protected it so that the currents would not carry the canoe away.

'I deal in Indian hemp and I used to buy it in Akure. I have a customer called Chinedu. It is true that the police met six bags of the Indian hemp in my house and fake 10 dollar notes.'

But the two suspects, Utah and Ebuagu, claimed that the devil, bad friends and poverty lured them into armed robbery.

'I'm a musician. People call me Onyenekwu, which now has become my name. I didn't have money or financial supporter to help me in the project. So when my friends sold the idea of going to rob to me, I accepted. I believed it would be the easiest way for me to realize money'