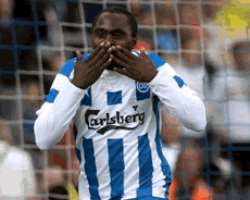 •Utaka in action
Super Eagles players invited for February 9 friendly international against Guatemala are to arrive United States of America (USA) three days before the all-important match, as confirmed by the team technical crew led by Coach Samson Siasia.

Eagles technical crew wanted the players to arrive US, rest a bit, before training together for the first time to blend for the match. The players, also eager to prove their mettle in the team, have all the opportunity to pick the first team's shirts for the friendly international.

The home-based players, who have been training for the President Obama invitational duel, are also expected to storm US February 5, a day before the arrival of the foreign-based players.

As at Press time, it was gathered that players were having difficulties securing the American Visa. The Nigeria Football Federation(NFF) was, however, said to be on top of the matter.

Newcastle's striker, Shola Ameobi, and Wigan's forward, Victor Moses, were among a squad of 20 players to face Guatemala.

The game will be Siasia's first match since he was put in charge and he has named a strong squad that include two home-based players in the team, Chibuzor Okonkwo and Bartholomew Ibenegbu both of Heartland.

Siasia will be reuniting with his Olympic team's former players, Ayodele Adeleye, Olubayo Adefemi and Olufemi Ajilore, the latter duo had been frozen out of the team before his appointment.

Mikel Obi is expected to make a return after missing out on the last AFCON qualifier against Guinea, while the coach has dropped strikers Obafemi Martins and Michael Eneramo.