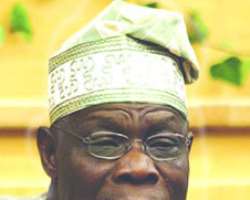 
It was a frustrating moment for former president Olusegun Obasanjo yesterday as his attempt to register in the ongoing voters' registration was thwarted by the Direct Data Capture (DDC) machine.

Obasanjo who arrived his Ward 11, Ita-Eko, Abeokuta, the state capital at about 11.53 a.m. in company with his wife, Bola had after several rejections of his fingers by the machine offered to come back for the exercise after an overseas trip.

However, the former president who had to wait patiently for about an hour succeeded in registering after an Independent National Electoral Commission (INEC) Information Technology expert arrived the scene at around 12.45 p.m. and performed the registration.

Even with the presence of the INEC officials and the IT expert, the registration took about 20 minutes for the process to be completed, while the state Resident Electoral Commissioner (REC), Mr. Martins Okunfolami and other INEC officials made frantic efforts to register the former president.

Before his eventual registration, when the first DDC machine failed, the INEC team, led by the REC changed its scanner and used two different ones which also disappointed them. Fielding questions from journalists, Obasanjo cautioned Nigerians against castigating INEC over the shaky start of the exercise. According to him, it was normal for a new programme such as the DDC technology-driven voters' registration to experience challenges at initial stage even though he stated that it was too late to call for extension of deadline for the exercise.

'Whenever you are starting a new programme like this, it's likely to have hitches until everybody masters it. Today is the second day. I believe that by the middle of this week, both the people who are carrying out the registration, the technicians, the INEC at the highest level will be able to make this work smoothly.

'So, I don't believe that we should now start to castigate and to condemn. If, of course, by the middle of the week it's not working as it should be, we will all see and then those who designed it would have to advise us how we can go about it. But for now, I believe let's regard this as the hiccup of a new process.' 'Let us not prejudge them, let's give them time to think and rethink if rethinking is necessary,' Obasanjo said.

'Nigerians, be patient and let us all be determined to get ourselves registered. I have said I'm travelling tonight to Cuba, when I return; I will come and sit down here until I am registered. And as I said jocularly, if it is blood that is not running in my vein, I will go for blood transfusion to make sure that I can be registered,' he added.