It was an eruption of euphoria in Delta State, Nigeria, as a baby girl was born amidst supernatural circumstances… 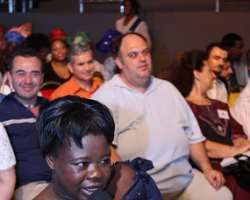 Mrs Joy Everbright had carried her pregnancy for 11 months. Awaiting a caesarean operation, necessary due to the wrong position of her baby in the womb, Joy had all but lost hope of delivering her child naturally. However, fearing the doctor's scalpel and hungry for divine solution, Mrs Everbright boldly made her way to a church in Lagos where miracles were said to happen. She received more than she bargained for.

In the midst of the large crowd at The Synagogue, Church Of All Nations on Sunday June 7th 2009, Pastor TB Joshua spotted Joy out with a pinpoint prophetic revelation. “There is a woman here – you are due. This is 11 months. Come out. You have been booked for operation. This is a baby girl.” Evidently shocked, Joy rushed forward. TB Joshua then prayed with her, telling her directly: “You will deliver your baby on Wednesday.”

The next week, Joy returned to the church to share her remarkable testimony. She had safely delivered her baby girl on Wednesday at 9:30am, precisely as the pastor had said. A medical doctor from the Bahamas who was present during the service confirmed, “This is indeed a miracle”, stating that an operation was the only medical option available in such a circumstance. What baffled the crowd most was the pastor's prediction of the exact day of the baby's birth, a declaration evidently made under divine influence.

Joshua used the occasion to explain the function of a pastor, saying: “Pastors are sent to utter the deep things of God for the conviction of sin, and for edification and comfort.” He further lamented “ministries of empty talk”, stating that many pastors don't dabble into the area of prophecy today for fear that it will expose their lack of authenticity and authority. He reminded the congregation of the biblical standard in Deuteronomy 18:22 - “If what a prophet proclaims in the name of the LORD does not take place or come true, that is a message the LORD has not spoken.”

In the same service which was broadcast live on Emmanuel TV, a couple from South Africa shared a similar testimony. Barren for 10 years due to a low sperm count and inverted womb, Mr Pieter and Mrs Gene Van Zyl joyfully explained how prayer from Pastor Joshua had wrought an incredible miracle. Now several months pregnant, Gene spoke of how the pastor had told them two years earlier that she would conceive, and admonished them to hold fast to God and His promises. “God can definitely do it for you” she encouraged the excited crowd, now that the promise had become a reality.

Pastor TB Joshua has garnered a reputation for his prophetic prowess on both a personal and international level. Recently, he is said to have prophesied the death of former South Korean President Roh Moo-hyn, the tragic plane crash in New York on Feb 13 and the release of Ingrid Betancourt from the Colombian jungle last year. The President of Ghana, John Evans Atta Mills, has publically acknowledged Joshua's prophetic ministry, stating he had accurately revealed to him details of his three-round election victory.

Concluding his sermon, Pastor Joshua said: “The prophecies of the prophets of old became signs. Each sign said: 'These men are from God; their message is true; believe their words.' ”