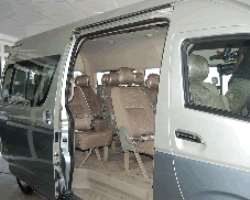 •Joylong bus
Friday, January 14, 2011
As the exclusive marketer (since 1998) of the BMW brand, and later the Land Rover line-up, as well as the joint dealer of the Ford models in the Nigerian market, Coscharis Motors is not just one of the biggest auto stables in the country, but also a company with a huge reputation among the competitors and the buying public alike.

However, not a few people were surprised when towards the end of last year, news filtered into the market that the company had ventured into the Chinese vehicles' 'territory', a segment which is far away from the denizen where the BMWs, Mercedes-Benzs, Land Rovers, the Hondas, the Toyotas, the Fords, etc, belong.

But, the answers to the questions Coscharis' diversification had drawn came during the opening of the showroom for Chinese 'economical brands' in the ultra-modern auto complex commissioned in Abuja recently. At the ceremony during which the Chinese commercial vehicles were unveiled, the President of the Coscharis Group, Dr Cosmas Maduka, named the brands as Joylong, Wuling,Yuejin and Hongyan, which are a rich mix of buses, pick-ups and trucks. He said his company went Chinese in line with its policy of providing sundry vehicles that are affordable to different pocket sizes.

He further explained that with the addition of the Chinese commercial vehicles to the Coscharis product portfolio, there is now a wide spectrum of products for the customers to choose from - guided, of course, by their needs and their purchasing power. 'Our drive to diversify our auto market segment from just premium brands necessitated making a foray into the auto economy segment. The intent is to ensure that all facets of the auto segment are covered by Coscharis Motors', Maduka told guests at the event.

He assured potential buyers that though the products are comparatively very affordable, 'these brands are very rugged, durable and at the same time luxurious. Today we shall also open the Showroom of Joylong, Wuling,Yuejin and Hongyan to'. Speaking specifically on Joylong bus, he said the vehicle has a maximum capacity of 18 seats, with petrol engine (four stroke, water cooling, in-line, 16 valves, DHOC). It has central door lock, power window, rear washer & defogger, CD & radio cassette player, ABS+EBD, electronic anti-theft system.

The Coscharis Group President went on: 'Joylong vehicles have a Fuel Supply System comprising Closed-loop Control, Multi-sequential Injection System and Lead-free Petrol. While as testimonial to the reliability of the Joylong bus it passed through test of the Yangzhou Entry-exit Inspection and Quarantine Bureau, which served the 2010 FIFA World Cup in South Africa.

'As a matter of fact, about 2000 Joylong vehicles were used in operation during the period of World Cup. The several testing and subsequent usage in South Africa, demonstrates that Joylong commercial vehicles are totally suitable for the Nigerian environment with reliable quality, cost effectiveness, performance and extraordinary market potential'.

The Wuling vehicles come in single and double cabin pickup trucks. The Wuling new single cab pickup truck inherits the superior quality and configuration from other Wuling mini vehicles series, and is reputable for its high load capacity, increased room and high horsepower. It can be used as mini passenger carrier and mini transportation truck, thus bringing more benefits to all users.

The quality, safety and cost of Wuling's new double-cabin pickup truck are all guaranteed by GM's Global Manufacturing System (GMS).

The new Yuejin brand has earned its development through five decades of trials. Yuejin trucks are noted for their ruggedness and reliability. Yuejin brand is distributed by Nanjing Automobile Import & Export Co Limited which specializes in the foreign trade business of automobile, mechanical and electrical equipment and its parts. Its main products include Yuejin brand light trucks and Nanjing-IVECO brand light truck and commercial vehicle.

In this vein, we have become associated with premium brands but in view of our vision to extend our quality service to other areas we have decided to diversify into the commercial vehicle segment, to cater for other auto segments that are commercial driven.

According to him, in 2009, SAIC topped the table among Chinese automotive groups,, in terms of a sales volume of over 2.72 million units of which 1.6 million were passenger cars and 1.12million commercial vehicles. The total consolidate revenue was $ 58.88 billion. Bryan pledged to ensure that the group brought 'best quality products with best after sales service here, and give all the support to Coscharis Motor. We believe that we have have the best future here'.