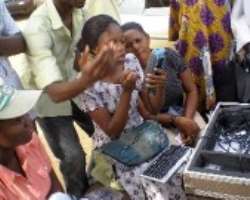 MUSLIMS in Nigeria, like their American and European counterparts face, in line with Ali Mazrui, 'three cultural crises relevant to their roles as citizens: the crisis of identity, the crisis of participation and the crisis of values and code of conduct.' These crises are of particular relevance to this write-up today.

How can a Muslim affirm his Islamic identity and participate in communal and public life in Nigeria when the latter has been held hostage by agents whose character and conduct not only go against explicit dictates of the religion of Islam but equally invalidate all human values and ethics - the value of honesty and probity, the value of accountability and the preservation of the sanctity of human life?

Coming face to face with a political process in which the people's mandate count less than the will of a small cabal which masquerades as the protector and preserver of public weal, right thinking Muslims, and indeed non-Muslims, are usually left with two options each time the voting exercise or registration of voters is underway.

Option number one is usually that of the extremely good citizen, the never-say-die who holds that despite the inner schisms and the grim underbellies of the electoral process, it is incumbent on him to register to vote and participate in the voting exercise when it is due. This citizen would not allow himself or herself to be deterred by the bloodletting and brigandage, which is being exhibited by a section of the political class.

In his view, when politicians engage in bloodletting and orgish display of violence, it is usually a ploy, on their part, to dissuade and frighten the best of the masses away from participating in the political process.

The second option for the ordinary Muslim in an insuperable political environment like ours in this country is to adopt the opinion which says that participation in the registration of voters exercise and in voting is an infraction of Divine rule- an attempt by the human to act the Divine.

This group of Muslim often say that voting is shirk, haram and kufr. They often argue that since democracy is nothing but the deification of the human will and desires in complete disregard of the Divine Will, the participation of Muslims in such a process becomes invalid.

The political environment in this country often provides this group of Muslims with classic examples to back up their non-participation stance.

But Azzam Tamimi, among others, says: 'Those who treat the questions of democracy or power-sharing as matters of 'aqeeda (faith), usually do not have specialised or adequate knowledge in the humanities, and are indoctrinated with some shallow Islamic literature.

They tend to define things with extreme simplicity. For instance, they understand Islamic government to mean 'God's rule' and democracy to mean 'people's rule.' Not only are issues of politics too complex to be simplified in this manner, but the conception of God's rule is totally misunderstood.'

If participation in the registration of voters exercise and voting in elections represents attempts by humankind to safeguard themselves from harm and to secure their interests then such exercises fall in the category of what is known in Islamic law and jurisprudence as maslaha (public interest), which dates back to the Maliki School and was later developed by Imam al-Shafi'i. The great Andalusian scholar Imam al-Shatibi developed maslaha further into the doctrine of Maqasid al-Shari'a (objectives of Shari'a), which the scholars turn to when deriving rulings for new circumstances. It provides a general framework for Muslims, to tackle their respective problems in changing conditions.

In a study recently released by the Islamic Forum in Europe, Shaykh Nizam Ya'qubi argues that in the matter of elections and voting we must look at what is in the best interest of the whole community (maslaha) and what is the lesser of the two evils (Akhaf al-Dararayn). The study also calls attention to a fatwa issued by Shaykh Salman al-'Audah (Saudi Arabia) in which he declared, 'participation in the political process can be a vehicle to reduce suffering of Muslims. He further stated that it could be a forum for countering ineffective policies as well as being an opportunity to present alternative proposals that may help people'.

Before Shaykh al-Awdah, Shaykh al-Islam, Ibn Taymiyyah had contended as follows: 'The Shari'a was revealed to obtain all possible benefits and to prevent as much harm as possible. Its aim is to achieve the best possible scenario from two good options if both cannot be achieved together, and to ward off the worst of two evils if both evils cannot be prevented'. Thus it can be clearly seen that the principle in Shari'a known as warding off the greater of two evils even if it involves performing the lesser evil (Akhaf al-Dararayn) is an obvious and agreed upon tool to help Muslims deal with difficult situations, whilst still being loyal to their tradition and heritage.

Thus when a Muslim says he would not register to vote then he should be prepared to taste of the warning the prophet gave many years ago: 'If people see an oppressor and don't prevent him, then it is very likely that Allah will include all of them in the punishment.'

In the life of Prophet Muhammad, upon him the peace and blessings of Allah, we have examples to celebrate. While he was in Makkah, he belonged to what could be described as a non-governmental organisation, which usually promoted the public good. The NGO was then known as Hilf al-Fudul. What this means that it is abhorrent for a Muslim to stand aloof from currents in his society, which have strong potential to impact his religious and profane life. History attests to the fact that our prophet was the one who mediated the covenant among the warring tribes of the Quraysh. Later, long after his call to prophethood, he said: 'I attended the forming of a covenant, which I would not exchange for any material gain. If now after Islam I am called upon to honour it, I would certainly do so.'

While he was in Madinah, the prophet entered into a political covenant or treaty with the Jewish and Christian residents of the city, according to which they were committed- as citizens of the new state- to join in the defence of the city, should it be exposed to outside aggression.

Dear brethren in Islam, in view of the foregoing, it becomes incumbent on me and you to go out and register our names with the Independent National Electoral Commission (INEC) preparatory to the forthcoming national elections. Not to do this is to yield space to the worst elements among us to continue to hold this country down. Allah says: 'Allah will not change the condition of a people until they endeavour to change that which is them.'