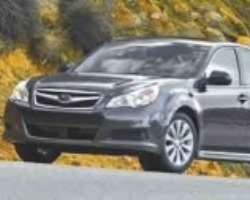 Stereo is optional on the Premium trims. The 3.6R models are essentially the same as the 2.5i models, but gain a six-cylinder engine, bigger brakes and 17-inch alloys for all models.

The Premium also gets the All Weather package. The 2.5GT Limited adds to the 3.6R Limited a turbocharged four-cylinder engine, six-speed manual transmission, 18-inch alloy wheels, summer tires, a hood scoop, a sunroof (optional on all other trims but 2.5i), foglights, unique interior trim and satellite radio.

Optional on the Limited trims is a navigation system package, which includes a touchscreen interface, voice controls, a rearview camera, Bluetooth phone and audio connectivity, and a different Harman Kardon sound system with a single-CD player, USB audio jack and iPod control.

Bluetooth is optional on the other trims, but is a port-installed system that plugs into the open dash slot beneath the stereo and relies upon its own small speakers rather than the stereo system.

Edmons motoring experts explained that the all-wheel-drive 2011 Subaru Legacy offers a variety of engines and transmissions.

The base 2.5-litre horizontally four-cylinder engine produces 170 horsepower and 170 pound-feet of torque.

A six-speed manual transmission (which includes a hill-holder feature) is standard on the base 2.5i and 2.5i Premium, while a CVT is optional on those models and standard on the 2.5i Limited.

In terms of safety, every 2011 Legacy comes standard with stability and traction control, antilock disc brakes, front side airbags and side curtain airbags.